Maya Moore Net Worth and salary: Maya Moore is an American professional basketball player who has a net worth of $300 thousand dollars. She is best-known for playing in the WNBA for the Minnesota Lynx.

Maya Moore was born in Jefferson City, Missouri, and began playing basketball when she was three years old. She had an incredibly successful high school basketball career, winning the Naismith Prep Player of the Year Award her junior year, among many, many other athletic honors. She went on to attend the University of Connecticut, where she set or matched multiple school records. During her four years at Connecticut, the team dominated college play. She was one of only three college students, and the only junior, to be invited to play for the US National Team in 2010. In 2011, the Minnesota Lynx drafted her. Since then, she has been named WNBA Rookie of the Year, and WNBA Finals MVP, as well as being named to the WNBA All-Rookie First Team, the Second Team All-NBA, and the First Team All-NBA. She is three-time All-Star, and a two-time WNBA Champion with the Lynx. 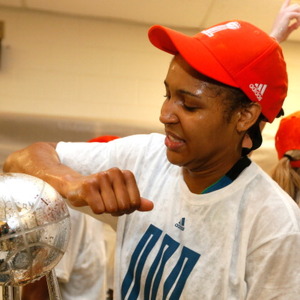