He was recruited by Saint Mary's College of California in the United States in 2009 and at the end of his college career was an all-time leader in scoring, assists, games played, free throw percentage, and three-point shots. After going undrafted in the 2013 NBA draft, Dellavedova joined the Cleveland Cavaliers for the 2013 NBA Summer League. Dellavedova re-joined the Cavaliers for the 2014 NBA Summer League and had a strong showing against the Brooklyn Nets in December, after being ruled out due to a sprained left knee he had sustained earlier in the year. In February 2015, Dellavedova was selected to participate in the "Rising Stars Challenge" as part of the 2015 NBA All-Star weekend. During the weekend, Dellavedova's aggressive playing style became a major talking point with some describing him as a dirty player. Dellavedova's style and comfort with up-close contact has led to a total of seven stitches on his forehead over the years and a few cuts underneath his chin, which resulted in more stitches. While his hyper-competitveness can rub some players and fans the wrong way, his teammates continue to defend his playing style. In addition to his career with the Cleveland Cavaliers, he also played for Australia in the 2012 Olympic Games in London; Australia placed 7th overall. 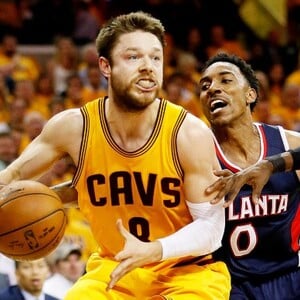