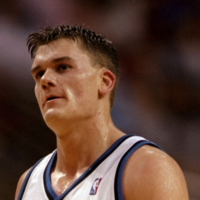 Matt Harpring Net Worth: Matt Harpring is a retired American professional basketball player who has a net worth of $20 million. During his career Matt earned a bit under $60 million in NBA salary alone.

Matt Harpring was born in Cincinnati, Ohio, in 1976, and played high school basketball in Georgia. Harpring spent his college career with Georgia Tech from 1994 until 1998 where he was a three-time first team All-ACC player and graduated as the school's second all-time leader in both rebounds and points. The Orlando Magic drafted him with the 15th overall pick during the first round of the 1998 NBA Draft. He made his debut with the Magic later that year, playing with the team until he was traded to the Cleveland Cavaliers in 2000. A year later, he was dealt a second time, this time to the Philadelphia 76ers. Harpring played in Philadelphia until 2002 before joining the Utah Jazz, where he remained until the end of his career in 2009. In 2009, he was traded to the Oklahoma City Thunder, but he opted not to report to the team and was waived. Harpring, a six-foot-seven, 230-pound small forward, earned NBA All-Rookie first team honors in 1999. Harpring finished his pro playing career with 7,645 points to go along with 3,366 rebounds and just over 900 assists. Since his retirement, Harpring has worked as an analyst for NBA TV.