Matt Geiger Net Worth: Matt Geiger is a retired American professional basketball player who has a net worth of $15 million. Born Matthew Allen Geiger on September 10, 1969, in Salem, Massachusetts, he spent his professional career playing in the National Basketball Association at the center position. Once Geiger revealed his talent for basketball playing for countryside High School in Clearwater, Florida, he was soon inducted to play college basketball at Auburn University.

He remained with Auburn until his transfer to Georgia Tech for more playing time. Geiger's shiny college career led Geiger to be chosen by the Miami Heat in the second round (42nd pick overall) of the 1992 NBA Draft. Since, he has completed 10 NBA seasons, from 1992 to 2002, playing with three teams: Miami Heat, Charlotte Hornets and Philadelphia 76ers. As a professional basketball player, he left a mark with his mid-range jump shot and his rebounding skills, both of which were considered to be his main assets. It was in the summer of 2000 that Matt Geiger refused to waive a trade kicker clause in his contract with the Philadelphia 76ers. In the 2000-01 season, he also got suspended for two games for a violation of the NBA/NBPA's steroid policy. A knee injury would push Geiger to retirement in 2012, even though he did sign a contract with the Philadelphia 76ers in 2001. Throughout his career, he averaged 9.2 points and 5.7 rebounds per game. As of today, he resides in Tarpon Springs, Florida where he works as a real estate investor. Geiger's 28 thousand square foot home sold for $8 million in 2011 after being originally listed at $20 million and on the market for four years. 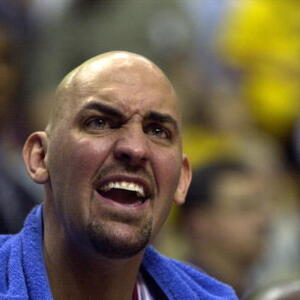