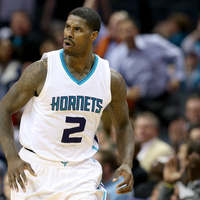 Marvin Williams Net Worth: Marvin Williams is an American professional basketball player who has a net worth of $18 million. Born in 1986 in Bremerton, Washington, Marvin Williams played college basketball for the University of North Carolina Tar Heels. He helped guide his team to an NCAA championship in 2005, the same season he was named the USBWA National Freshman of the Year. The Atlanta Hawks drafted Williams with the second overall pick during the first round of the 2005 NBA Draft. Only Andrew Bogut was chosen ahead of Williams. Williams played with the Hawks until 2012 when he became a member of the Utah Jazz until 2014. In 2014, Williams landed with the Charlotte Hornets on a reported $14 million contract, where he currently plays as of the fall of 2014. Williams earned NBA All-Rookie second team honors in 2006. The six-foot-nine, 237-pound small forward and power forward is averaging 6.3 points and 3.1 rebounds per game during the current 2014 NBA season. Over the duration of his career, Williams has appeared in close to 650 games, averaging 10.7 points per contest to go along with five rebounds and 1.3 assists. Williams is currently making about 39 percent of his career three-point shot attempts.