He has an older sister named Tamara and a younger brother named Nikola who lives and plays basketball in Switzerland. He also holds citizenship in Greece under the surname Latsis, which was the name he played basketball under in that country. Jarić is the only player ever to win back-to-back Italian Championships on two different teams. Jarić was selected as the 30th overall pick in round one of the 2000 NBA Draft by the Los Angeles Clippers. In August 2005 he was traded to the Minnesota Timberwolves by the Clippers, in exchange for Sam Cassell and a future first-round draft pick. In June 2008 he was traded to the Grizzlies in an eight-player deal involving rookie guard O. J. Mayo and rookie forward Kevin Love. He retired from professional basketball in 2013. On Valentine's Day 2009, Jarić married supermodel Adriana Lima. The couple has two daughters. Jarić and Lima announced their separation on May 2, 2014 after five years of marriage. 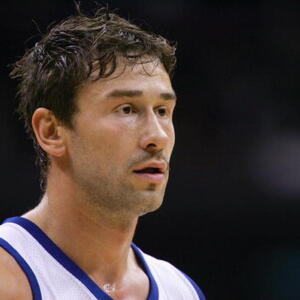