Mark Blount Net Worth: Mark Blount is a retired American professional basketball player who has a net worth of $8 million. Mark Blount was born in Yonkers, New York, in 1975. He played college basketball for the University of Pittsburgh from 1995 until 1997. The Seattle SuperSonics drafted the seven-foot tall, 250-pound center with the 54th overall pick during the second round of the 1997 NBA Draft.

He did not, however, play in the NBA until 2000 with the Boston Celtics. Prior to that, Blount was a member of the CBA's Yakima Sun Kings, France's Paris Basket Racing, the USBL's Atlantic City Seagulls, the CBA's La Crosse Bobcats, the IBL's Baltimore Bayrunners, and the USBL's New Jersey Shorecats. Blount's tenure with the Celtics lasted until 2002 when he joined the Denver Nuggets from 2002 until 2003. He returned to the Celtics from 2003 until 2006 before playing with the Minnesota Timberwolves from 2006 until 2007, the Miami Heat from 2007 until 2009, and the Timberwolves a second time from 2009 until 2010. Blount finished his pro playing career with close to 5,000 total points to go along with 2,784 rebounds and more than 500 blocked shots. He averaged just over eight points per contest in addition to 4.6 rebounds in more than 600 career regular season games. Blount went to the postseason four times with the Celtics, appearing in 22 games and averaging 4.2 points per playoff game. 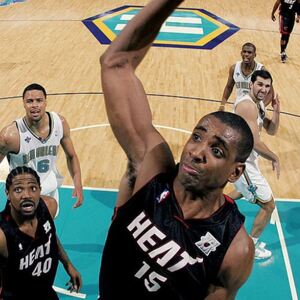