Mark Aguirre net worth: Mark Aguirre is a former professional basketball player who has a net worth of $3 million. Born in Chicago, Illinois, in 1959, Mark Aguirre was named the 1981 College Basketball Player of the Year by "The Sporting News" during his career with DePaul University. He won the Naismith Award in 1980 and was a two-time first-team All-American.

The small forward had one Final Four appearance and played on the 1980 U.S. Olympic team before leaving school after his junior season to turn pro. Aguirre was drafted first overall by the Dallas Mavericks in 1981. He played for the Mavs until 1989 without winning a championship, though he set several franchise single-season scoring records and has the third-most points in the team's history (13,930). Aguirre won his two NBA champions with the Detroit Pistons in 1988-89 and 1989-90. The three-time NBA All-Star finished his career with the Los Angeles Clippers in 1994. He and his wife, Angela, have four children. 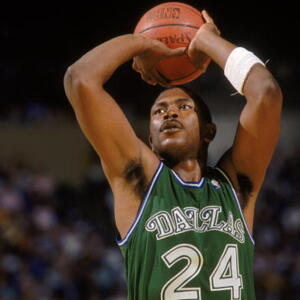