Marcus Camby Net Worth: Marcus Camby is an American professional basketball player who has a net worth of $50 million. Born in 1974 in Hartford, Connecticut, Marcus Camby earned Connecticut Player of the Year honors when he was in high school. He played his college basketball career at the University of Massachusetts, where he set several records and was named the conference's Freshman of the Year.

He helped guide his team to an appearance in the Elite Eight of the NCAA Tournament and later the Final Four. Camby won the Naismith College Player of the Year Award and the John R. Wooden Award the same season and opted to leave school early to turn pro after his junior year. Later, Camby's appearance in the Final Four was vacated after an investigation discovered he took thousands of dollars from agents. In 2010, Camby was inducted into the school's Athletic Hall of Fame amid controversy. The Toronto Raptors chose Camby with the second overall pick during the 1996 NBA Draft. Two years later, he was traded to the New York Knicks, where he stayed until 2002. Camby played for the Denver Nuggets (2002-2008), Los Angeles Clippers (2008-2010), Portland Trail Blazers (2010-2013), Houston Rockets (2012), New York Knicks (2012-2013), and Houston Rockets (2013). He earned All-Rookie first-team honors in the NBA and was twice on the All-Defensive first-team. In 2007, Camby was the NBA Defensive Player of the Year. The six-foot-eleven-inch center/power forward hasn't played since 2013, though he remains a free agent and is not retired as of mid-2014. Camby has faced several off-the-court legal run-ins, including a marijuana possession arrest in 1997. In 2011, he was charged with marijuana possession a second time, though they were later dropped. Camby is active in several charities and founded the Cambyland Foundation to work with schools to improve opportunities for students. 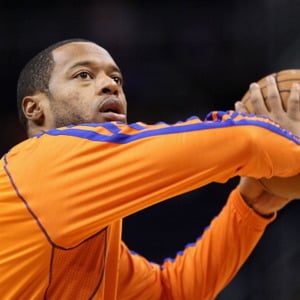