Marc Gasol Net Worth and salary: Marc Gasol is a Spanish professional basketball player who has a net worth of $50 million. Marc Gasol was born in Barcelona, Spain in February 1985. Gasol grew up in Spain but moved to Memphis, Tennessee where he played high school basketball. Marc is the younger brother of NBA player Pau Gasol.

Marc went back to Spain to play professionally for FC Barcelona from 2004 to 2006 and then played for Akasvayu Girona from 2006 to 2008. Gasol was drafted #48 by the Los Angeles Lakers in the 2007 NBA Draft but he was traded to the Memphis Grizzlies where he has played since 2008. Gasol was a Spanish League champion in 2004 and was named Spanish League MVP in 2008. He was named to the NBA All-Rookie Second Team in 2009 and was an NBA All-Star in 2012. In 2013 Gasol was part of the All-NBA Second Team and NBA All-Defensive Second Team. He was also named NBA Defensive Player of the Year. Gasol also competes internationally for Spain and has won two Silver medals at the 2008 and 2012 Olympics. He was won Gold medals at the 2006 FIBA World Championships and the 2009 and 2011 FIBA European Championships. Marc signed a four year $58 million deal with Memphis in 2011. Between June 2017 and June 2018, Marc earned $24 million between salary and endorsements. 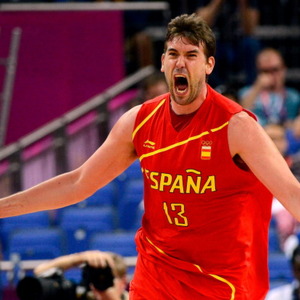