What is Manu Ginóbili's Net Worth?

Manu Ginóbili is an Argentine professional basketball player who has a net worth of $45 million. Over the course of his 23-season career, Ginóbili played solely for the San Antonio Spurs, winning four NBA championships. He has won a EuroLeague title, an NBA Championship, and an Olympic gold medal, becoming one of only two players to accomplish this feat (the other is Bill Bradley). Among his contributions to the game of basketball, Manu has been recognized for introducing the Euro step move to the NBA.

Raised amidst a family of professional basketball players, Ginóbili spent the first portion of his career competing for teams in Argentina and Italy. He was then drafted in 1999 by the Spurs and quickly became an integral part of their lineup. Along with his four championship wins, Manu also won All-Star honors, All-NBA honors, and the NBA Sixth Man of the Year award. Ginóbili eventually retired in 2018.

Emanuel David "Manu" Ginóbili was born on July 28th of 1977 in Bahía Blanca, Argentina. Two of his brothers eventually went on to play professional basketball in Europe, and the boys were all trained by their father, Jorge. Manu became enamored with basketball at a very early age, idolizing American stars like Michael Jordan. Ginóbili is fluent in both Italian and Spanish.

Manu Ginóbili began his career in the Argentine basketball league, playing for the Andino Sport Club of La Rioja. After spending one season with the team, he was traded to the Estudiantes de Bahia Blanca in 1996. This was his hometown team, and he remained with them until 1998. After this, he relocated to Europe and played for several seasons with the Italian team Basket Viola Reggio Calabria. Once there, he teamed up with a number of former NBA players, such as Brent Scott and Brian Oliver. By 1999, he was ready to enter the NBA draft, and he was selected by the San Antonio Spurs as the 57th overall pick.

However, he neglected to sign a contract with the Spurs and instead returned to Italy, joining the team Kinder Bologna and winning the Italian League Championship, various Italian Cups, and the 2001 EuroLeague. During this period, he also won numerous MVP awards and All-Star honors within the Italian league. In addition, he joined the Argentine national team and competed at the 2002 FIBA World Championship.

By 2002, he was ready to return to the Spurs and sign a contract. Initially, he played as a backup to Steve Smith and spent much of his time injured. He also struggled to adapt to the NBA's style of play, which was markedly different from what he had experienced in Italy. However, he eventually began to improve. By the playoffs, Ginóbili had become an important part of coach Popovich's overall strategy, and he started every game of the post-season. Manu won the NBA championship alongside his teammates that year. 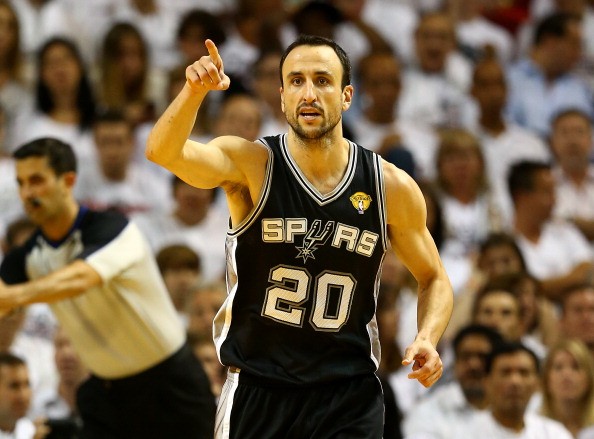 Ginóbili started to feature more prominently during the next season. During his third season with the Spurs, he signed another contract and started every game. He later went on to win another championship title with the Spurs. After an injury-prone season that followed, Manu started few games, but he eventually received more playing time during the 2007 playoffs and won his third championship title. Next season, he became a central figure for the Spurs yet again and won a place on the starting lineup on several occasions.

In 2013, Ginóbili won a fourth championship title with the Spurs. In 2015, he signed a new contract with his team and played his 900th game for them in 2016. After a testicular injury saw him miss 12 games, Ginóbili scored a total of 13,000 career points later in 2016. At the age of 39, Manu came off the bench to score more than 20 points in a playoff game against the Golden State Warriors. He later became the only player in history to have multiple 20-point games off the bench over the age of 40. In 2018, Ginóbili announced his retirement from basketball, and his No. 20 jersey was retired.

Ginóbili is considered one of the best sixth men in NBA history, establishing a stellar reputation as a shooting guard during his career. He entered the NBA at the relatively old age of 25, although he quickly proved himself to be versatile enough to adapt to the modern game with relative ease. A reliable player for the Spurs throughout some of the franchise's most successful years, Manu was called upon for his skills at the backcourt on numerous occasions. His style of play was quite aggressive, and he scored vital points with three-pointers or fierce drives to the basket. Although Ginóbili was not the first to use the Euro step in the NBA, he is credited with popularizing it.

Manu was also known for his excellent teamwork, accepting his role as a bench player without much fuss. Some of his most notable skills included no-look passes and "flops" while driving into the basket. Due to his ability to draw charges from defenders, many fans consider him to be one of the greatest floppers in NBA history. Some even compared his antics to those of "diving" soccer players who were looking for penalties.

In 2007, sportswriter John Hollinger described Ginóbili as the sixth-best international player in the NBA. Due to his lack of reputation when approaching the NBA, the San Antonio Spurs have also been credited with finding and taking advantage of Manu's skills when he fell under the radar for many other teams.

In 2004, Manu married his wife, Marianela Oroño. Six years later, they welcomed twins into the world. In 2014, they had a third child together.

The San Antonio Spurs once paid Manu Ginobili $14 million dollars in salary per season. He also earned an estimated $2-3 million per year from endorsements during his playing career. 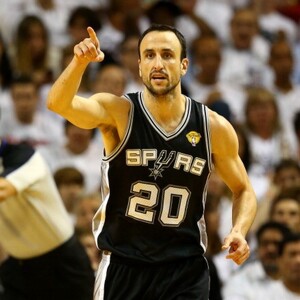