Malik Beasley net worth and salary: Malik Beasley is an American professional basketball player who has a net worth of $6 million. He is best known for being a guard for the Denver Nuggets.

Malik Beasley was born in Atlanta, Georgia in November 1996. He is a 6'4″ shooting guard who played for St. Francis High School. Beasley played his college basketball for Florida State where he was selected to the ACC All-Freshman team in 2016. He was drafted #19 overall by the Denver Nuggets in the 2016 NBA Draft. Malik Beasley played for the Nuggets from 2016 to 2020. During that time he also played for the Sioux Falls Skyforce of G-League. In 2020 Beasley was traded to the Minnesota Timberwolves. During his first five NBA seasons he averaged 8.2 points per game. Malik Beasley. In 2020 he was seen out with Larsa Pippen, the ex-wife of Scottie Pippen who is 22 years his senior. Soon after photos of Malik and Larsa were posted online, his wife Montana Yao filed for divorce. 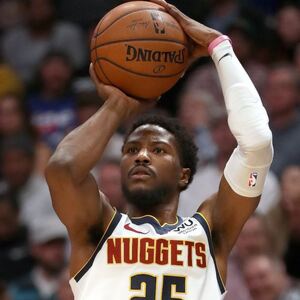