Luke Walton Net Worth: Luke Walton is an American professional basketball coach and former player who has a net worth of $30 million. Today, he is best known as the coach of the Sacramento Kings, although he previously played for ten seasons in the NBA. During his playing years, he earned praise after winning two championships with the Los Angeles Lakers. After ending his career with the Cleveland Cavaliers, Luke quickly transitioned to coaching.

As a coach, Walton achieved considerable success with the Golden State Warriors, helping them win a title as the assistant coach. During this period, he acted as their interim head coach for the 2015-16 season and led them to a record-breaking winning streak. He then took on the role of head coach for the Los Angeles Lakers from 2016 to 2019 before moving to the Sacramento Kings.

Early Life: Luke Theodore Walton was born on March 28th of 1980 in San Diego, California. Luke was born into a family with a rich basketball history, as his father is NBA legend Bill Walton. If you're thinking that Luke was named after a certain Jedi, you can think again. Even though he was born at the height of the "Star Wars" hysteria, Luke was actually named after Maurice Lucas, an NBA player who played on the same team as his father. Raised alongside three brothers, Luke attended high school in California and graduated in 1988.

After graduating from high school, Luke attended the University of Arizona and was coached by Lute Olson. He performed well over the years, and by 2003 he had graduated from Arizona after studying family studies and human development.

Playing Career: During the 2003 NBA draft, Luke Walton was selected by the Los Angeles Lakers. Although he was a reserve player, he quickly established a reputation for himself as a hardworking young player. He reached his peak in the 2006-2007 season, when he scored 25 points against the Atlanta Hawks and set a number of impressive personal records. In 2007, Walton signed a new contract with the Lakers for $30 million. In 2009 and 2010, Luke managed to win two championships with the Lakers. In 2012, he was traded to the Cleveland Cavaliers, where he ended his playing career.

Coaching Career: Even before being traded to the Cavaliers, Walton was beginning his coaching career. His first job came when he was hired as an assistant coach for the University of Memphis. This was during the 2011 lockout, when he had nothing else to do. After his retirement, he joined the Los Angeles D-Fenders as a player development coach in the NBA Development League.

His first major breakthrough as a coach came in the 2014-2015 season, when the Golden State Warriors hired Walton as an assistant coach. When Steve Kerr took a lead of absence during the 2015-2016 season, Luke took over as interim head coach. A number of impressive results soon followed, including a massive, record-breaking win against the Memphis Grizzlies. With his reputation as a talented coach firmly established, Luke moved to the Los Angeles Lakers to act as their head coach. Although he helped the team achieve strong results, internal conflicts led to his departure in 2019. Walton then took a new job as head coach of the Sacramento Kings.

Relationships: In 2013, Luke Walton married Bre Ladd, his girlfriend of many years. They had met 11 years prior at the University of Arizona. They have two children together.

Controversies: Luke Walton has been involved in a few controversies over the course of his life. In 2008, it was revealed that a woman had been stalking the NBA player. She was accused of following Luke around, and at one point she pretended to fire gunshots at him with her hand.

Perhaps his most notable controversy came in 2019, when SportsNet host Kelli Tennant sued him for sexual assault. According to her, Luke sexually assaulted her in a hotel room while he was acting as the assistant coach for the Golden State Warriors. Tennant argues that the incident was not consensual, while Walton argues the opposite. Due to lack of evidence, the lawsuit was dropped.

Real Estate: Luke Walton has made a number of notable real estate investments over the years. His first major purchase came in 2004, when he had just signed for the Los Angeles Lakers after leaving college. Luke paid $860,000 for a condo in Manhattan Beach, California. Four years later in 2008, he sold this property for a significant profit, raking in $1.235 million. One year before this sale, Luke had already lined up a new home in Manhattan Beach. This was a significant upgrade on his original home, and he paid $2.75 million for the property. Over ten years later, Luke managed to offload this property for $3 million, once again earning a significant profit.

Manhattan Beach seems to be a favorite spot for Walton, and as far as we can tell, he hasn't purchased properties in any other areas. In 2017, Luke upgraded once again, paying $7.2 million for an impressive mansion in (where else?) Manhattan Beach. The property spans 10,000 square feet of living space, and it features French Riviera-style architecture. With eight bedrooms and eight bedrooms, the residence is clearly designed to host many individuals, and it was once owned by CEO John Macaluso.

Additional features include a games room, a movie theater, and a 300-bottle wine room. Outside, Walton's home features landscaped gardens, an outdoor kitchen, an outdoor bar, and a 46-foot pool. 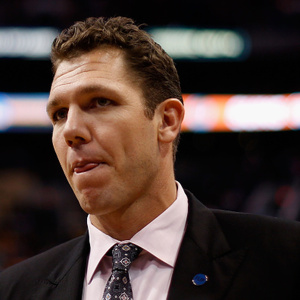