Luis Scola net worth: Luis Scola is an Argentine professional basketball player who has a net worth of $30 million. Luis Scola was born in Buenos Aires, Argentina in April 1980. He is a 6'9″ power forward who first played for Ferro Carril Oeste in Australia from 1995 to 1998. Scola played for Tau Cermamica in Spain from 1998 to 2007 and played for Gijon Baloncesto from 1998 to 2000.

He was the Spnish League Rookie of the Year in 2000 and the Spanish Supercup MVP in 2005. Scola was a two time Spanish League MVP and a two time All-Euroleague First Team selection. He was drafted #56 by the San Antonio Spurs in the 2002 NBA Draft but remained in Spain. Scola played for the NBA's Houston Rockets from 2007 to 2012 and for the Phoenix Suns from 2012 to 2013. He played for the Indiana Pacers from 2013 to 2015 and has played for the Toronto Raptors since 2016. He was selected to the NBA All-Rookie First Team in 2008. Scola has also represented Argentina in international competition and has won Gold Medals at the 2004 Athens Olympic Games, the 2008 FIBA Diamond Ball, and the 2001 and 2001 FIBA Americas Championship. He was named the FIBA Americas Under-20 Championship MVP in 2000 and is a four time FIBA Americas Championship MVP. In 2007 he signed a three year deal for $9.5 million with Houston. 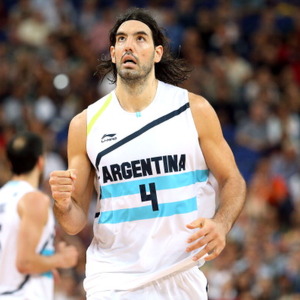