Larry Hughes net worth and salary: Larry Hughes is a professional basketball player who has a net worth of $45 million. Larry Hughes stands 6 feet 5 inches tall and is a shooting guard with a career spanning more than twelve years. Hughes has played for the Philadelphia 76ers, Golden State Warriors, Washington Wizards, Cleveland Cavaliers, Chicago Bulls, New York Knicks, Sacramento Kings, Charlotte Bobcats, and the Orlando Magic. He is known for being a versatile and athletic guard with strong defensive abilities. Larry Hughes born on January 23, 1979 in St. Louis, Missouri and started his basketball career at Christian Brothers College High School, winning the Missouri State Championship in 1997. He was a childhood friend of rapper, Nelly. Hughes played one season of college basketball at Saint Louis University and finished the '97-98 season with per game averages of 20.9 points, 5.1 rebounds, 2.4 assists, and 2.16 steals.

Hughes was drafted by the 76ers in the first round of the 1998 NBA draft. He signed a five-year, $70 million contract with the Cleveland Cavaliers as a free agent in the summer of 2005. At the time, he was brought onto the team to provide assistance to the then young superstar, LeBron James. In the '05-06 season he helped LeBron and the Cavs to an 18-10 record before requiring surgery on his broken finger. In 2006, Hughes was a recipient of the Austin Carr Good Guy Award that recognizes the Cavaliers player who is cooperative and understanding of the media, community and the public at large. In 2008, he was traded to the Chicago Bulls.

Later, in 2009, just before the trade deadline, he was traded from the Bulls to the Knicks. In 2010 he was traded again to the Sacramento Kings in a three-team deal with the Knicks, but was waived by the Kings in February of 2010 so he could sign with the Charlotte Bobcats for the rest of the season. In 2011, Hughes signed a non-guaranteed contract with the Orlando Magic and was waived in 2012 after averaging 1.3 point in nine games. He is currently a free agent. Larry Hughes has a wife named Carrie and four children. He has another child with actress and model, Sunday Carter that was born in 2007. 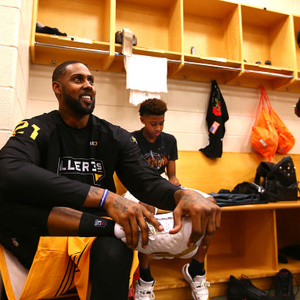