LaMarcus Aldridge Net Worth: LaMarcus Aldridge is an American professional basketball player who has a net worth of $40 million. LaMarcus Aldridge was born in Dallas, Texas in July 1985. Aldridge is a 6'11" power forward/center. He was a Parade All-American and Texas Association of Basketball Coaches Class 4A Player of the Year at Seagoville High School. Aldridge played at the University of Texas and declared for the 2004 NBA Draft before withdrawing. Aldridge was a Third-team All-American in 2006 and he later declared for the 2006 NBA Draft where he was selected #2 by the Chicago Bulls. After being drafted his rights were traded to the Portland Trail Blazers where he has spent his entire NBA career. During his career LaMarcus was selected to the NBA All-Rookie First Team and has been selected to the All-NBA Third Team twice. He is a three time NBA All-Star from 2012 to 2014. In 2009 Aldridge signed a five year deal with the Trail Blazers worth $65 million. 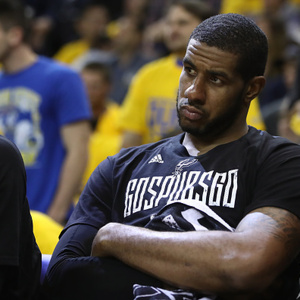