What is Kristaps Porzingis' net worth and Salary?

Kristaps Porzingis is a Latvian professional basketball player who has a net worth of $30 million. Kristaps is a  7'3″ power forward who started playing at six years old. Porzingis played for Sevilla from 2011 to 2015 and was loaned to Sevilla B from 2011 to 2012. He was a two time ACB All-Young Players Team selection and won the EuroCup Rising Star in 2015.

He was drafted #4 overall by the New York Knicks in the 2015 NBA Draft. Kristaps Porzingis was named to the NBA All-Rookie First Team in 2016 and was an NBA All-Star in 2018. He played for the Knicks from 2015 to 2019 and was traded to the Dallas Mavericks in 2019. During his first three NBA seasons he averaged 17.8 points per game along with 7.1 rebounds per game. 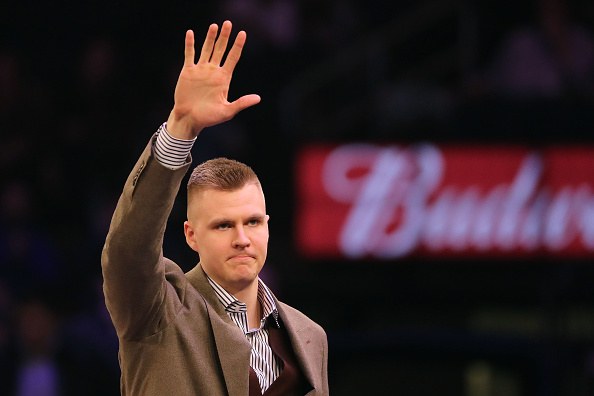 In June 2019, Kristaps Porzingis signed a five-year $158 million deal with the Dallas Mavericks. From season to season the deal increased his annual salary from $5 million to $30 million. The deal will have boosted his NBA earnings above $100 million by the end of the 2021-2022 season.

Kristaps Porziņģis was born on August 2, 1995 in Liepāja, Latvia to Tālis and Ingrīda, who are both former basketball players. Due to their influence, he began playing basketball at the age of six. When Porziņģis was 12, he went to offseason training sessions with his older brother Jānis, who played professionally in Europe. He subsequently played in the youth competition with BK Liepājas Lauvas through the age of 15. At this time, the Baloncesto Sevilla club called him for a tryout, and he ended up signing a contract in 2010. Porziņģis made his debut with the Sevilla youth squad in January of 2012 in a game against FC Barcelona.

Porziņģis made his debut with Sevilla's senior squad in the 2012-13 season. In May, he recorded a season-high seven points in a game against Bilbao Basket. Porziņģis had an even stronger second season, leading Sevilla to a 20-point ACB victory over Laboral Kutxa and posting a new career-high 12 points, six rebounds, and four blocks. He went on to break his record in a game against Real Madrid in November, and then broke it again in April of 2014, when he scored 20 points. In May, Porziņģis was named to the ACB All-Young Players Team.

In October of 2014, Porziņģis debuted in the Liga ACB; he subsequently made his first appearance at the EuroCup. During the season, he had a strong performance against Pallacanestro Virtus Roma, posting 18 points, seven rebounds, and four assists. In February of 2015, he recorded a season-high 19 points against Turów Zgorzelec, and later tied this total in a game against Bàsquet Manresa. In recognition of his success, Porziņģis received the EuroCup Rising Star Award.

Porziņģis entered the NBA draft in 2015, and was selected with the fourth overall pick by the New York Knicks. He went on to make his NBA debut in a season-opening win over the Milwaukee Bucks. Porziņģis continued his strong start, and was named Eastern Conference Rookie of the Month for his games in October and November; he later earned honors for his games in December and January as well. Porziņģis finished the season second in the NBA Rookie of the Year Award voting, and also earned NBA All-Rookie First Team honors.

The 2016-17 season was when Porziņģis started to break out as a major name in the NBA. In November, he posted a new career high of 35 points in a victory over the Detroit Pistons. During the 2017 All-Star Weekend, he won the Skills Challenge. Porziņģis continued to prove his strength the following season, when he recorded a career-high 38 points just before breaking that record with 40 points in a win over the Indiana Pacers. However, his success was curtailed by an ACL tear in February of 2018, causing him to miss the remainder of the season.

In January of 2019, Porziņģis was traded to the Dallas Mavericks. He made his debut with the team in October, recording 23 points and four rebounds in a victory over the Washington Wizards. Porziņģis went on something of a tear over the following months, consistently topping his season-high scoring totals in games throughout February and March. Following an overtime win against the New Orleans Pelicans, Porziņģis became the first player since Shaquille O'Neal in 2000 to notch consecutive 30-point, five-block games. Later, in August, he made his NBA playoff debut against the Los Angeles Clippers; however, after scoring 14 points and six rebounds, he was ejected in the third quarter for an altercation with Marcus Morris. Porziņģis appeared in Games 2 and 3, but missed the remainder of the series due to a lateral meniscus tear. The Mavericks were ultimately eliminated in six games.

After missing the first nine games of the 2020-21 season due to surgery, Porziņģis made his season debut in January. The Mavericks went on to finish the season with a 42-30 record, while Porziņģis became only the sixth Maverick ever to have multiple seasons averaging over 20 points per game. Unfortunately, his numbers fell drastically in the first round of the playoffs, when he averaged 13.1 points per game.

With the Latvian national team, Porziņģis played in EuroBasket 2017, and averaged 23.6 points and 5.9 rebounds per game. Against eventual champion Slovenia, he recorded a tournament-high 34 points. Ultimately, Latvia was eliminated by Slovenia in the quarterfinals.

In addition to English and Latvian, Porziņģis is fluent in Spanish thanks to his time living in Seville. He is an avid football fan, and supports his former club Sevilla, his hometown team FK Liepāja, and Real Madrid. 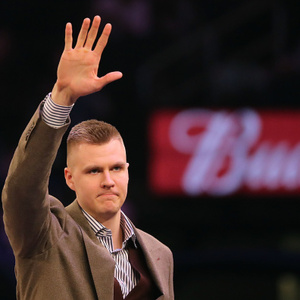