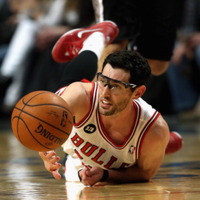 Kirk Hinrich Net Worth: Kirk Hinrich is an American professional basketball player who has a net worth of $30 million. Born in Sioux City, Iowa, in 1981, Kirk Hinrich began playing basketball as a child. He attended the University of Kansas from 1999 until 2003, where he earned third-team All-American honors during his final season with the Jayhawks. The Chicago Bulls drafted Hinrich with the seventh overall pick during the first round of the 2003 NBA Draft. He played in the Windy City from 2003 until 2010 before spending some time with the Washington Wizards from 2010 until 2011, the Atlanta Hawks from 2011 until 2012, and the Bills a second time from 2012 until the present (currently the fall of 2014). He earned NBA All-Rookie First Team honors in 2004 and the NBA All-Defensive Second Team honors three years later in 2007. Hinrich played on the U.S. men's national team, appearing at the FIBA World Championships in Japan in 2006 and earning a bronze medal. Hinrich has appeared in more than 50 postseason games, with his deepest run coming when the Bulls appeared in ten games in 2007. Hinrich has been married to his wife, Jill Fisher, since 2007. They have two children, daughters named Kenzie and Kyla, born in 2008 and 2011.