How much is Kevin McHale Worth?

Kevin McHale net worth and salary: Kevin McHale is an American basketball coach who has a net worth of $16 million. He is currently the head coach of the Houston Rockets. He started in the National Basketball Association with the Boston Celtics in 1980, making the All-Rookie First Team his beginning season. He was the NBA's first player to shoot more than 60% from the field and over 80% from the free throw line. At one point his million dollar a year salary made his paycheck the fourth highest in the NBA. After injuries and ankle surgeries, McHale decided to retire in 1993. The Celtics retired his team number—32—in his honor. In 1996 he was chosen as one of the Fifty Greatest Players and also included on the 50th Anniversary All-Time Team. The biggest honor was induction into the Basketball Hall of Fame. He was born in Hibbing, Minnesota in 1957 and a star on the University of Minnesota basketball team turning his college career. So it was a natural progression for McHale to become a television commentator for the Minnesota Timberwolves after retirement. He later became General Manager of the team but switched to coaching them in 2008. In 2011 he moved to the Houston Rockets as head coach. He has pursued a television career as a game analyst with NBA TV and on the Turner Sports' NBA on TNT. He appeared twice in the sitcom Cheers, playing himself. The 6'10" McHale and his wife Lynn have five children. 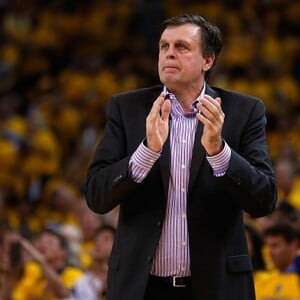