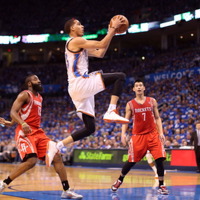 Kevin Martin Net Worth: Kevin Martin is an American professional basketball player who has a net worth of $24 million. Kevin Martin was born in Zanesville, Ohio, in 1983. He played college basketball at Western Carolina from 2001 until 2004, where he earned SoCon All-Freshman Team honors in 2002 and All-SoCon Second Team honors the second year. He was a two-time All-SoCon First Teamer from 2003 until 2004. The Sacramento Kings drafted Martin with the 26th overall pick during the first round of the 2004 NBA Draft. He played in California until 2010 before joining the Houston Rockets from 2010 until 2012, the Oklahoma City Thunder from 2012 until 2013, and the Minnesota Timberwolves in 2013. As of the fall of 2014, Martin is still with Minnesota. The six-foot-seven, 197-pound shooting guard is one of the league's better scorers; he previously led the NBA in free throw shooting percentage during the 2010-11 season. As of October of 2014, Martin has appeared in 620 career regular season games, averaging 19.1 points per game to go along with three rebounds and 1.8 assists per game. He has made the postseason twice, first in 2006 with the Kings and later in 2013 with Oklahoma City. He appeared in eleven playoff games with the Thunder, where he averaged 14 points and three rebounds per game.