Kevin Johnson net worth: Kevin Johnson is an American politician and former professional basketball player who has a net worth of $10 million. Kevin played in the NBA from 1987 to to 2000. During his NBA career he earned $30 million in salary. His peak salary came in his final full season, the 1997-1998 season, when he earned $8 million. That's the same as around $13 million today after adjusting for inflation. After retiring from the league Kevin entered politics. He served as Mayor of Sacramento from 2008 to 2016.

Kevin Johnson was born in Sacramento, California in March 1966. He was a 6'1″ point guard who played at Sacramento High School. While playing for California, Johnson was a two-time First-team All-Pac-10 selection and had his #1 retired by the University of California. He was drafted #7 by the Cleveland Cavaliers in the 1987 NBA Draft and played for Cleveland from 1987 to 1988. Johnson played for the Phoenix Suns from 1988 to 2000.

During his NBA career he was a three time All-Star and four time All-NBA Second Team selection. Johnson was named the NBA Most Improved Player in 1989 and won the J. Walter Kennedy Citizenship Award in 1991. His #7 was retired by the Phoenix Suns. Johnson initially retired after the 1997-1998 season but briefly returned to the league a year later. He then retired again.

After The NBA: After retiring from the NBA Kevin focused full-time on The Kevin Johnson Corporation which operates real estate, small businesses and manages his public speaking engagements.

In 1989 Kevin founded an after-school program for kids in his native Oak Park neighborhood of Sacramento called St. HOPE (Helping Others Pursue Excellence). In 1994 the St. Hope Development Corporation was founded to revitalize buildings in Oak Park.

In March 2008 Kevin announced his intention to run for Mayor of Sacramento. He was elected in June 2008 and reelected in 2012 and became the first African American to serve in that office.

Controversies: In October 2015 Kevin announced he would not seek re-election as Mayor of Sacramento in the wake of sexual abuse allegations. A woman claimed that when she was 16 and he was adult playing in the NBA, Kevin sexually abused her then paid her family $230,000 to keep quiet. In 1996 Phoenix police secretly recorded the victim confronting Kevin. On the recording Kevin can be heard apologizing for the abuse but also insisting he did not agree that it occurred. 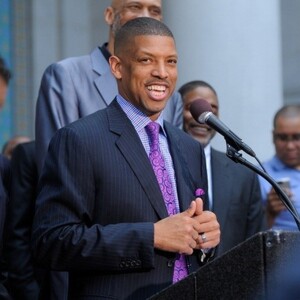