What is Kawhi Leonard's net worth and salary?

Kawhi's $39.3 million base salary makes him one of the 10 highest-paid players in the NBA. He earns millions more every year from endorsements. In his first decade in the NBA, Kawhi earned $150 million in NBA salary.

Kawhi Anthony Leonard was born on June 29, 1991, in Los Angeles, California, where he was also raised. Leonard is the last of five kids (and the only boy) born to Mark Leonard (his father) and Kim Leonard (his mother). Kawhi's life was marked early on by tragedy when his father was murdered at their family-owned Compton car wash which he owned and operated.

Kawhi Leonard attended Canyon Springs High School and transferred to Martin Luther King High School in his junior year. During his senior year, Leonard played alongside Tony Shell, putting up amazing performances that deemed him a 4-star recruit according to Rivals.com. In 2009, Kawhi was listed as the 48th-ranked player in the nation as well as the number 8 small forward overall.

Kawhi played two seasons at the college level for the San Diego State Aztecs where his prowess on the court earned him a consensus spot on the second-team All-American squad during his sophomore year.

During Kawhi's sophomore season, he led the Aztecs to win their second consecutive conference championship, at which point the team entered the NCAA tournament for a second time during Leonard's tenure. The Aztecs then progressed to the round of 16 before being beaten by UConn (University of Connecticut), who would go on to win the NCAA championship that year (2011).

Leonard chose to leave college after his sophomore year, and the Indiana Pacers drafted him immediately. He did not play any games for the Pacers, however. Leonard was quickly traded to the San Antonio Spurs, where he would begin a decorated career under legendary coach Gregg Popovich.

Kawhi finished his first season with the Spurs with a nomination to the All-Rookie First Team. He remained with the Spurs from 2011 to 2018 and wracked up a range of sports honors while playing for the Spurs, including being named the NBA Finals MVP, as well as winning the NBA Championship. Kawhi's style of play and attributes earned him the nickname "The Klaw" early on, and his stoic demeanor and personality made him a fan favorite.

Leonard won Defensive Player of the Year in both 2015 and 2016, famously disrupting the most offensively efficient players in the league.

In 2018 Kawhi, after seven seasons with the Spurs, was traded to the Toronto Raptors. In 2019, he led the Toronto Raptors to its first NBA title and ended up winning his second Finals MVP award. After his contract ended on June 30, 2019, Kawhi moved back to his hometown of Los Angeles to play with the LA Clippers as a free agent in July 2019 alongside Paul George, Lou Williams, and Serge Ibaka. Today Kawhi Leonard earns $23 million per year.

Leonard scored more than 30 points in a game thirteen times in the 2019 playoff season, further solidifying his standing as one of the best in the sport. His outstanding skills on the court have earned him comparisons to topflight NBA talent such as LeBron James, Kevin Durant, and Stephen Curry.

In 2015 Leonard signed a 5-year $90 million contract with the Spurs. As a result of this contract, Kawhi's annual salary jumped from $3 million to $16 million to $17 million, respectively.

Though Kawhi Leonard is famously sparse with words, his most famous quote is "The board man gets paid," which is a reflection of his willingness to execute certain intangibles on the court that are necessary for a team to win.

In March 2021 Kawhi paid $17 million for a home in LA's Pacific Palisades neighborhood:

He also owns a $7 million condo in downtown Los Angeles in a Ritz Carlton building. 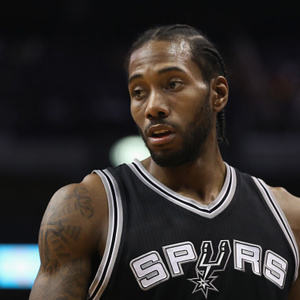