Juwan Howard net worth and salary: Juwan Howard is a retired American professional basketball player who has a net worth of $80 million. Juwan Howard is notable for being the first NBA player to receive a $100 million contract. Between 1996 and 2006 he earned a salary of $15 million per year. Juwan Howard was born in Chicago, Illinois on February 7, 1973. Howard was raised by Jannie Mae Howard, his maternal grandmother, who adopted him. His mother was only 17 and too young to raise a child on her own, and Juwan was not close with his father. In high school at the Chicago Vocational Career Academy, he was an honors student and played on the basketball team as a center, where he was named an All-American. He was scouted by several universities and decided to attend the University of Michigan. He was a member of the Fab Five at Michigan along with Chris Webber, Jalen rose, Jimmy King and Ray Jackson, The combined efforts of the Fab five lead Michigan to the finals in the 1992 and 1993 National Collegiate Athletic Association (NCAA), Men's Division I Basketball Championship. Due to the University of Michigan Basketball scandal during 1992 to 1998, a lot of the school's records and accomplishments have been forfeited by NCAA sanctions, however Howard's 1993-94 All-American season accomplishment remains.

Juwan has been married to Jenine Wardally since 2002, they have two sons, Jace who was born in 2001 and Jett was born in 2003. Juwan also has another son born in 1992 with Markita Blyden, who was runner-up for Michigan's Miss Basketball. He is the founder of the Juwan Howard Foundation, which helps underprivileged youth in Washington, DC and Chicago, by fostering youth basketball activities. Howard has had a small acting career appearing on a 1999 episode of The West Wing titled " The Crackpots and These Women" he played Mr. Grant a former Dude basketball player, who worked for the President's Council on Physical Fitness. He also appeared in the basketball film Hoop Dreams in 1994, on several T.V. shows like Arli$$, Beyond the glory, and "Son-in-Law". 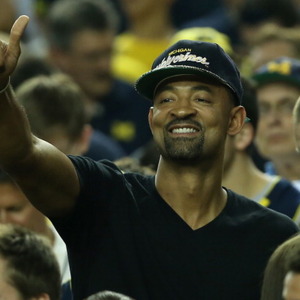