What is Julius Randle's net worth and salary?

Julius Randle is an American professional basketball player who has a net worth of $25 million. Julius Randle was born in Dallas, Texas in November 1994. He is a 6'9″ power forward and center. Randle played at Prestonwood Christian High School where he was a McDonald's All-American and Jordan Brand Classic co-MVP in 2013. He played his college basketball for Kentucky where he was the SEC Rookie of the Year, first-team All-SEC, and a third-team All-American in 2014.

Julius Randle was drafted #7 overall by the Los Angeles Lakers in the 2014 NBA Draft. He played for the Lakers from 2014 to 2018 and then for the New Orleans Pelicans starting in 2018. During his first five seasons in the NBA he averaged 15.4 points per game along with 8.9 rebounds per game.

In 2018 Julius Randle signed a two year $18 million deal with the Pelicans. In 2019 he signed a 3-year $62 million contract with the Knicks that came with $56.7 million guaranteed. This deal increased Randle's average annual salary to $20 million. In August 2021 he signed a 4-year $117 million extension with the Knicks. At the time, he could have opted to wait one more year and then sign a $200 million extension, but Julius chose to lock-in the deal he had "in hand." 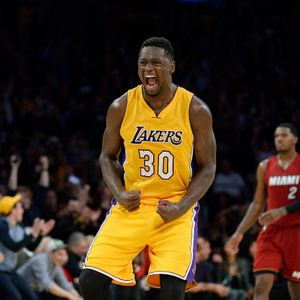