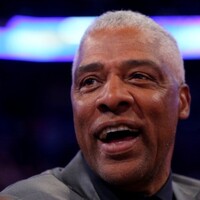 What is Julius Erving's Net Worth?

Julius Erving is a retired American basketball player and current entrepreneur who has a net worth of $50 million. Julius Erving, also known as "Dr J", earned fame and fortune playing in the NBA where he pioneered the modern style of leaping, "slam dunk" play above above the rim. Across his 16 seasons, during which he played for the Virginia Squires, New York Nets, and Philadelphia 76ers, he won three championships and four MVP awards, and scored an incredible 30,026 points, ranking third on the all-time scoring list. Erving was especially renowned for his powerful yet graceful dunking skills. After the NBA he launched a highly successful business and endorsement career.

He was born Julius Winfield Erving II on February 22, 1950, in Nassau County, New York. A high school and college basketball star, Erving got his nickname "The Doctor" and "Dr. J" thanks to his flamboyance and skill on the court. After two successful varsity college basketball seasons, he left college to play in the now-defunct American Basketball Association (ABA). He joined the league in 1971 as an undrafted free agent with the Virginia Squires. After he spent five years with the ABA, he joined the NBA where he stayed for another prolific 11 years with the Philadelphia 76ers.

In 1976, upon the merger of the ABA and the NBA, Julius signed what is believed to be the first basketball shoe endorsement contract. The contract paid a then-unprecedented $20,000 per year. After adjusting for inflation, that's the same as $90,000 per year today. By the mid-1980s he was earning $100,000 per year from Converse, the same as $250,000 per year today. This actually became important when Michael Jordan was a soon-to-be NBA rookie in 1984. Jordan had won Converse all through college and UNC and wanted to continue wearing them in the pros. According to legend, Converse passed on Michael because he was demanding more than what Dr. J and Larry Bird were making at the time. Converse wanted Jordan, but they wouldn't have been able to explain to Bird and Erving that this new unknown rookie was suddenly making more than them OR that they were getting raises to equal this new rookie.

Upon retiring from the NBA, Julius invested in a Philadelphia bottling plant. He was the majority owner in this business for twenty years.

In 2016 Julius sold the lifetime rights to the name "Dr. J" to Authentic Brands Group (ABG). As part of the deal he received an upfront buyout plus annual set royalties. ABG owns the likeness and name rights to many celebrities, notably dead ones like Elvis, Marilyn Monroe and Muhammad Ali.

Julius Erving was born on February 22, 1950 in East Meadow on Long Island, New York, and was raised in nearby Hempstead. As a teenager, he moved to Roosevelt, New York, where he went to Roosevelt High School.

In 1968, Erving enrolled at the University of Massachusetts Amherst. He played two varsity college basketball seasons there, during which he averaged 26.3 points and 20.2 rebounds per game, near-records for NCAA men's basketball. Because the NCAA passed a rule to forbid dunking, Erving's signature dunking skills were yet unknown to the public.

Leaving UMass after his junior year, Erving signed a four-year contract with the ABA's Virginia Squires in 1971. He immediately established his acumen on the team, and worked up a reputation for his powerful dunking abilities. As a rookie, Erving scored 27.3 points per game and helped the Squires advance to the Eastern Division Finals. His next season was embroiled in conflict as he became central to a contract dispute between the ABA and the NBA. Erving had signed with the Atlanta Hawks early in 1972, but was later selected by the Milwaukee Bucks in the NBA draft. The three teams subsequently fought over rights to Erving before he finally returned to the Squires. Despite the fracas, he didn't miss a beat, posting a career-best 31.9 points per game for the 1972-73 season. 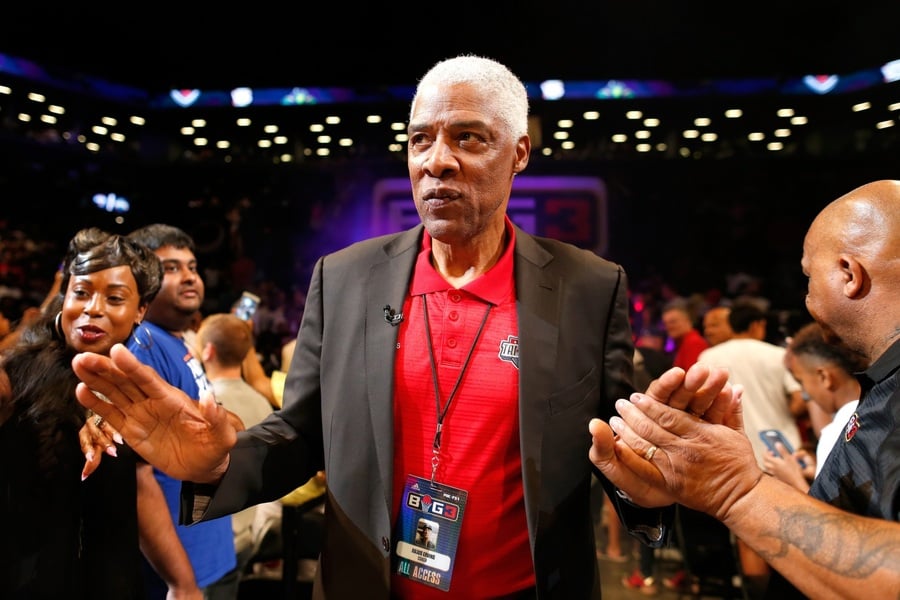 Struggling financially, the Squires sold Erving's contract to the New York Nets in 1973. In his debut season with the team, he led the Nets to their first ABA championship title, and quickly established himself as the most significant player in the association. Erving remained among the highest-profile players when the ABA merged with the NBA following the 1975-76 season. That season, he was named MVP of the playoffs and led the Nets to another championship title.

After several teams tried and failed to acquire him – including, most infamously, the New York Knicks – Erving was traded to the Philadelphia 76ers in 1976. His resounding success continued as a Sixer, as he led the team to a 50-win season and an NBA Finals appearance in his first year. Erving was challenged, however, by the arrival of Larry Bird to the NBA's Boston Celtics in 1979, kicking off a longstanding sports rivalry that saw numerous matchups in the Eastern Conference Finals. No such obstacles stood in his way for the 1982-83 season, though, as Erving and the Sixers dominated the season en route to the NBA championship title. He continued to play well even into his final professional years, including his final season in 1986-87.

Widely regarded as one of the best dunkers in basketball history, Erving is also credited with bringing the practice to mainstream attention. His signature move was the slam dunk, which he demonstrated in some of his most famous moments on the court. One of his most memorable dunks occurred in Game 6 of the 1977 NBA Finals, when he ran the length of the court and unleashed a powerful dunk over the outstretched arms of Blazers defender Bill Walton. Erving had another highlight in a 1983 regular-season game when he slung the ball around his head and dunked over Lakers defender Michael Cooper, a move described by radio broadcaster Chick Hearn as a "Rock the Baby" slam dunk.

After retiring from basketball, Erving became a businessman and acquired ownership of a Coca-Cola plant in Philadelphia. Later, in 1997, he joined the front office of the Orlando Magic. The year after that, Erving partnered with former NFL player Joe Washington to field a NASCAR Busch Series team. Among his other activities, he served on the board of directors of such companies as Converse, Saks, and Sports Authority.

In 1979, Erving starred in the film "The Fish That Saved Pittsburgh," a sports comedy featuring many other NBA stars. Later, after his basketball playing career ended, he made a cameo in the 1993 legal drama "Philadelphia." Erving also made cameos in episodes of the television sitcoms "Hangin' with Mr. Cooper" and "The Office." In 2022, he appeared as himself in the sports drama "Hustle," starring Adam Sandler.

In 1972, Erving married his wife Turquoise; they had four children, one of whom, Cory, drowned in 2000. During his marriage, he carried out an affair with sportswriter Samantha Stevenson, with whom he had a daughter named Alexandra in 1980. However, Erving only met Alexandra for the first time on Halloween in 2008, by which time his daughter had become a professional tennis star.

In 2003, Erving divorced Turquoise amid another extramarital affair with a woman named Dorys Madden. With Madden, whom he married in 2008, he has four children.