Josh Smith Net Worth: Josh Smith is an American professional basketball player who has a net worth of $50 million. Born in 1985 in College Park, Georgia, Josh Smith was a highly touted high school prospect. Though he committed to attend Indiana University and play for the Hoosiers, Smith changed his mind and entered the NBA Draft without playing college basketball. The Atlanta Hawks chose Smith with the 17th overall pick during the first round of the 2004 NBA Draft. He played with the Hawks until 2013 when he signed a reported four-year, $54 million contract with the Detroit Pistons in July. As of the fall of 2014, Smith currently plays with Detroit. The six-foot-nine, 225-pound power forward/small forward earned NBA All-Rookie second-team honors in 2005 and NBA All-Defensive second-team honors in 2010. He won the league's slam dunk contest during his rookie season. Nicknamed J-Smoove, Smith has appeared in 52 postseason games, all of them with Atlanta between 2008 and 2013. His best finish came in 2011 when the Hawks played in 12 playoff games. Smith is averaging 15.8 points per game in the playoffs and 15.5 points per game during the regular season. He became the youngest player in the history of the NBA to have ten blocked shots in a game (set on December 18, 2004), to block 500 shots in his career (set on March 3, 2007), and to block 1,000 shots in his career (Set on February 2, 2010). 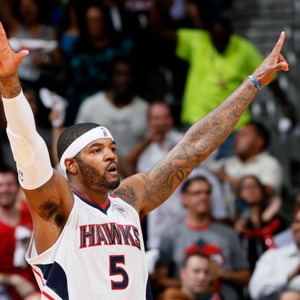