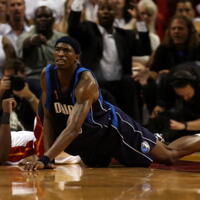 Josh Howard net worth: Josh Howard is an American college basketball coach and former professional basketball player who has a net worth of $10 million. Josh Howard was born in Winston-Salem, North Carolina in April 1980. He was a 6'6″ small forward and shooting guard who played at Glenn High School and Hargrave Military Academy. Howard played his college basketball at Wake Forest where he was named ACC Player of the Year and First-team All-ACC in 2003 when he was also a consensus first-team All-American and eventually had his #5 retired by Wake Forest. Josh Howard was drafted #29 overall by the Dallas Mavericks in the 2003 NBA Draft. He played for the Mavs from 2003 to 2010 and then for the Washington Wizards from 2010 to 2011, the Utah Jazz from 2011 to 2012, and Minnesota Timberwolves in 2012. He was an NBA All-Star in 2007 and selected to the NBA All-Rookie Second Team in 2004. Howard became the coach at Piedmont International University in 2016.