Jose Calderon Net Worth and salary: Jose Calderon is a Spanish professional basketball player who has a net worth of $35 million dollars. Born Jose Manuel Calderon Borrallo in Villanueva de la Serena, Badajoz, Spain, Jose Calderon's professional career began in his native country with Tau Ceramica from 1998 until 2005.

He played with Diputacion Foral Alava, CB Lucentum Alicante, and Baloncesto Fuenlabrada, before landed an undrafted free agent deal with the NBA'S Toronto Raptors in 2005. The six-foot-two, 211-pound point guard played with the Raptors until 2013 when he joined the Detroit Pistons. Shortly after, Calderon played for the Dallas Mavericks from 2013 until 2014. He then played for New York Knicks, followed by the Lakers, the Hawks and the Cavs. Calderon currently holds the Raptors' all-time franchise record for most career assists. He played internationally for Spain, earning two gold medals, including one at the European Championship in 2011 in Lithuania. Calderon has medaled three times at the Olympic Games, earning silver in Beijing in 2008, another silver in London in 2012 and a bronze in Rio in 2016. He is involved with the league's Right To Play Athlete Ambassador program, where he works to help youth in poorer parts of the world. He donated $14,000 to the program after a game against the Chicago Bulls. Calderon earned more than $80 million in salary during his career (before taxes and fees). His highest-earning season was 2012-2013 when he made $11 million playing for the Detroit Pistons. Outside of basketball, Jose Calderon and his wife, Ana Hurado, have one son together and co-own an organic pig farm. 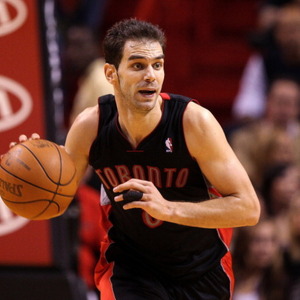