John Starks Net Worth and Salary:  John Starks is an American retired professional basketball shooting guard who has a net worth of $20 million. Although going undrafted, Starks gained fame while playing for the New York Knicks in the 1990s, particularly for executing one of the most famous plays in Knicks history, which is now known simply as "The Dunk." John is also the first player in NBA history to shoot over 200 three-pointers in one season. During his career John Starks earned $25 million in salary alone.

Early Life: Starks was born on August 10th of 1965 in Tulsa, Oklahoma. He attended Tulsa Central High School, where he played one year on the basketball team. After high school, in 1984, John entered Rogers State College, where he was part of the basketball team's "taxi squad."

Rogers State expelled Starks for stealing a student's stereo equipment in retaliation for the student breaking into his dorm room. As a result, John transferred to Northern Oklahoma College in 1985 and made the basketball team after serving five days in jail for his robbery. Starks eventually left the college after being caught smoking marijuana in his dorm room.

Career: In September of 1988, Starks signed with the Golden State Warriors as a free agent. He played 36 games during the 1988-89 season, although an injury at the end of the season resulted in his release. For the next two basketball seasons, John played in the NBA's minor league system for the Cedar Rapids Silver Bullets and the Memphis Rockers.

Starks tried out for the New York Knicks in 1990. After being injured during the try-out, the Knicks were forced to keep John on the team. After recovering, he continued practicing with the team and eventually became their starting shooting guard. Starks was a key player on the team and played for eight seasons between 1990 and 1998.

During the 1993 Eastern Conference Finals against the Chicago Bulls, John executed one of the most famous plays in Knicks history, which would become known as "The Dunk." Starks had possession of the ball on the Bull's half and was guarded by B.J. Armstrong. John's teammate, Patrick Ewing, came to set a screen for Starks, who then faked left as if to exploit the screen but instead drove to the net and dunked over Horace Grant and Michael Jordan with his left hand.

The following season, John and the New York Knicks made it to the NBA Finals, where the Houston Rockets narrowly defeated them four games to three. That season Starks recorded a career-high 19 points per game. The following year, John became the first player in NBA history to make 200 three-point shots in one season, having recorded 217. That year, the Knicks lost in the Eastern Conference semi-finals to the Indiana Pacers. The Knicks also made the playoffs each of the following three seasons that Starks played with the team.

John then played two seasons with the Golden State Warriors, one with the Chicago Bulls, and two with the Utah Jazz before retiring in 2002. He finished with 10,829 career points. Starks currently works as a pre-game and post-game analyst for the Knicks home games on the MSG Network. Starks is part-owner of the Ektio basketball shoe brand, designed to reduce ankle injuries in players.

Relationships: On December 13th of 1986, John Starks married his wife, Jackie. Their first child, John Jr., was born in 1987. They also have two daughters called Chelsea and Tiara. 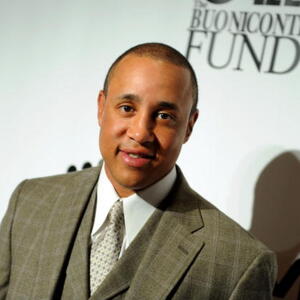