John Salmons Net Worth: John Salmons is an American professional basketball player who has a net worth of $20 million. Born in 1979 in Philadelphia, Pennsylvania, John Salmons played college basketball for the University of Miami Hurricanes from 1998 until 2002. He earned third-team All Big East conference honors in 2001 and second-team All Big East conference honors in 2002. The San Antonio Spurs drafted Salmons with the 26th overall pick during the 2002 NBA Draft, but immediately dealt him to his hometown Philadelphia 76ers before Salmons ever suited up for the Spurs. Salmons spent four seasons with the 76ers before he signed a deal with the Sacramento Kings in 2006. Salmons played with the Kings in 2009 before joining the Chicago Bulls from 2009 until 2010, the Milwaukee Bucks from 2010 until 2011, the Kings a second time from 2011 until 2013, and the Toronto Raptors from 2013 until 2014. As of the beginning of the 2014 season, Salmons currently plays for the New Orleans Pelicans. The six-foot-six, 207-pound small forward/shooting guard has played in close to 900 career NBA games prior to the start of the 2014 season. He averaged just over nine points, three rebounds, and two assists per game. Salmons has been in the postseason with various teams five times throughout his career to date. 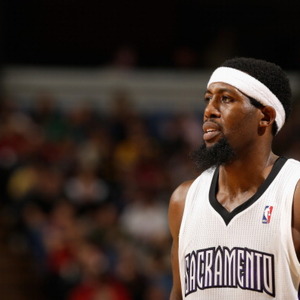