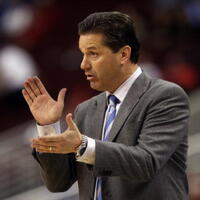 What is John Calipari's Net Worth and Salary?

Calipari has a long history of leading university teams to the "Final Fours," which refers to the last four teams standing in the NCAA Division I Men's Basketball Championships. Although John has been accused of cheating and various controversies, he has been cleared of all wrongdoing. He is one of the highest-ranked NCAA Division I coaches in terms of his overall win ratio. In addition, John has written many books about basketball and was the subject of an ESPN documentary.

John Vincent Calipari was born on February 10th of 1959 in Moon Township, Pennsylvania. Raised in the suburbs of Pittsburgh in an Italian family, Calipari graduated from high school in 1978. To this day, John holds dual Italian and U.S. citizenship. During his high school years, he played basketball as a point guard. He then spent two years at UNC Wilmington before playing point guard once again for the University of Pennsylvania. During this period, he led the team in assists and free-throw percentage. John eventually graduated with a bachelor's degree in marketing.

During his time as head coach of the Minutemen, Calipari led the team to five consecutive Atlantic 10 titles and NCAA Tournament appearances. During this period, John won numerous honors and awards – mostly in recognition of the fact that he was "overachieving" with a team of rather ordinary players. He focused on creating a system whereby these players could still excel despite their limitations. During this period, he also created the "Platoon Offense" system.

After proving himself with the Minutemen, Calipari accepted a position as head coach of the New Jersey Jets in the NBA. Despite some notable controversies, the Nets performed well under John's early guidance – particularly during the 1997-98 season when they qualified for the playoffs. However, he was fired during the 1998-99 season due to disappointing results.

John returned to college ball in 2000, accepting the role of head coach at the University of Memphis. During this period, he popularized the "dribble drive" motion offense initially invented by Vance Walberg. Calipari's tenure at Memphis was excellent, and he led the Tigers to a number-one ranking for the second time in the school's history. In 2009, he was appointed as the head coach of the University of Kentucky. During this period, he led the team to numerous titles.

John married his wife Ellen in 1986. They have had two daughters and a son together.

Perhaps the biggest scandal of Calipari's career was his much-publicized feud with fellow coach John Chaney. Chaney famously threatened to end John's life in a post-game conference, interrupting Calipari while he was speaking. Chaney accused Calipari of manipulating referees, and he also insulted John's Italian heritage. He then threatened John and attempted to charge onto the stage, but he was held back by security. Despite this incredible incident, Chaney and Calipari reconciled.

From 2009 to 2019, John Calipari's base salary was $6.5 million. In June of 2019, he signed a 10-year, $86-million contract extension that comes with an average salary of $9 million. Starting six years into the deal (2024), John has the option to step down as coach and take an advising job at the University of Kentucky (read "cushy desk job") that will come with a $950,000 annual salary. It's a pretty solid contract no matter how you look at it.

In 2009, it was reported that Calipari had made a number of real estate transactions. When he accepted the position of head coach at the University of Kentucky, John purchased a home in Lexington for about $2.2 million. He also purchased a vacant lot next door, which was valued at over $500,000 at the time. The assumption was that he intended to expand into this vacant lot. That being said, the home itself already offered a ton of living space – 10,000 square feet of it to be exact. In addition, the garage alone offers 1,000 square feet and enough room for three automobiles. Additional features include seven bedrooms, a stone fireplace, and a sunroom with floor-to-ceiling windows.

In 2009, John also sold his longtime home in Memphis for $1.425 million. He had originally purchased the residence back in 2000 for $1.495 million, which means he accepted a loss of about $70,000. The residence spans almost 7,000 square feet of living space, and it sits on 1.26 acres of land in a gated community near the Galloway Golf Course. Notable features include a basketball/tennis court.