Joel Przybilla Net Worth: Joel Przybilla is a retired American professional basketball player who has a net worth of $16 million. Joel Przybilla was born in 1979 in Monticello, Minnesota. He stayed close to home to play college basketball and played with the University of Minnesota Golden Gophers from 1998 until 2000.

As a senior in high school, Przybilla was named Minnesota Mr. Basketball in 1998. The Houston Rockets drafted Przybilla with the ninth overall pick during the first round of the 2000 NBA Draft. He made his debut with the Milwaukee Bucks in 2000, playing with the Wisconsin team until 2004. He later played with the Atlanta Hawks in 2004, the Portland Trail Blazers from 2004 until 2011, the Charlotte Bobcats in 2011, the Trail Blazers a second time in 2012, and the Bucks a second time from 2012 until 2013. The seven-foot-one, 245-pound center announced his retirement from the NBA on August 24, 2014 after he did not play during the 2013 season. Over the course of his career, he appeared in close to 600 NBA games. Przybilla averaged nearly four points per game to go along with just over six rebounds per contest. He played in eleven playoff games, appearing in two postseasons with the Bucks and one with Portland. 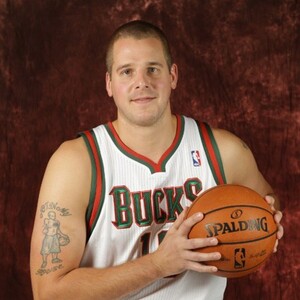