Joakim Noah net worth and salary: Joakim Noah is an American professional basketball player playing center in the NBA who has a net worth of $50 million. Joakim Noah was born in New York City in 1985 to a Swedish mother and French father from Cameroon. Noah is a citizen of the United States, Sweden, and France.

Joakim Noah played college basketball at the University of Florida and was an integral part of the Gators teams that won two consecutive NCAA Championships in 2006 and 2007. Joakim Noah, who stands at 6'11', was selected with the ninth overall pick in the first round of the 2007 NBA Draft by the Chicago Bulls. In addition to being a two-time NCAA Men's Basketball National Champion, Joakim Noah was named the 2006 NCAA Final Four Most Outstanding Player, he was a consensus second team All-American in 2007, NBA All-Defensive Second Team in 2011, NBA All-Defensive First Team in 2013, and was selected to the NBA All-Star game in 2013. Joakim Noah speaks fluent French and also plays for the French national basketball team. He could have also played for the American or Swedish national teams, but chose France. During the offseason Noah calls Florida his home. 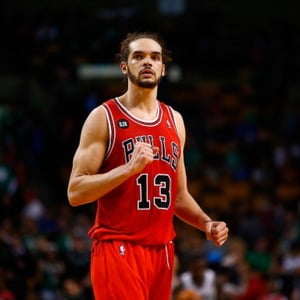