How much is Jim Calhoun Worth?

Jim Calhoun net worth and salary: Jim Calhoun is the former head coach of the men's basketball team at the University of Connecticut. He has a net worth of $12 million. Jim Calhoun was born in Braintree, Massachusetts. He attended Braintree High School where he played both baseball and football. He received a scholarship for Lowell State, but was only able to attend for three months, after his father had fatal heart attack which forced Jim to return home to help his family. Jim took several jobs, including grave digger, headstone carver, worker in a shampoo factory and others to help his family. He was able to return to college and finish his education 20 months later. He went to American International College in Springfield, Massachusetts and received another scholarship for basketball. He earned a Bachelors Degree in sociology in 1968.

In 1971, Calhoun was recruited to be the new head coach at the Northeastern University in Boston. He was given six regional Coach of the Year Awards from Northeastern and is ranked as the coach with the most wins, with a record of 245-138. He was also the head coach at the University of Connecticut. In 1986 he led the Huskies to win the NIT championship after reaching the NCAA Tournament Elite Eight. He led the University of Connecticut to win many championships and to also win seven Big East Men's Basketball Tournament Championships. He received his 700th win at Gampel Pavilion. In the history of the NCAA, Calhoun was the first coach to have won at least 240 games in two schools that were both division I. He was inducted into the Dr. James Naismith National Basketball Hall of Fame in 2005. In 2014 he signed a five year $16 million contract.

Him and his wife Pat have two sons and six grandchildren. They reside in Pomfret, Connecticut and Long Island South, in Madison, Connecticut. Together they co-founded the Pat and Jim Calhoun Cardiology Research Fund, in honor of their parents who were lost to heart disease. They have also raised almost $1 million, through the Jim Calhoun Annual Food Drive, to help food assistance agencies provide for families in need. They are involved in several benefits for causes such as Cancer and Diabetes. Calhoun is the Honorary Chairman of the Juvenile Diabetes Foundation and has been for years, and has contributed to to programs such as the Ronald McDonald House, Children's Miracle Network, Connecticut Children's Medical Center and more. 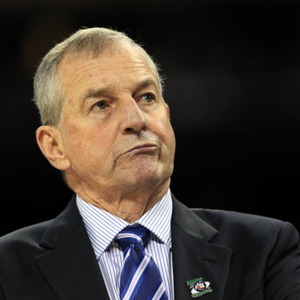