How much is Jim Boeheim Worth?

Jim Boeheim Net Worth and Salary: Jim Boeheim is an American basketball coach who has a net worth of $16 million. His annual salary before bonuses is $2.5 million. Jim Boeheim was born November 17, 1944 in Lyons, New York. He is currently the head coach of the men's basketball team at Syracuse University. Boeheim has led the Orange to 9 Big East regular season championships, 5 Big East Tournament championships and 28 NCAA Tournament appearances, including three appearances in the national title game. In those games, the Orange lost to Indiana in 1987 and Kentucky in 1996 before defeating Kansas in 2003. Boeheim graduated from Lyons Central High School then enrolled in Syracuse University in 1962 and graduated with a bachelor's degree in social science. During his freshman year, Boeheim was a walk-on with the freshman basketball team. By his senior year he was the team captain and a teammate of All-American Dave Bing, his freshman roommate. The pair led the Orange to a 22–6 overall win-loss record that earned the team's second-ever NCAA tournament berth. After graduating from Syracuse, Boeheim played professional basketball with the Scranton Miners of the American Basketball League during which he won two championships and was a second-team all-star (SU Athletics). In 1969, Boeheim was hired as a graduate assistant at Syracuse under Roy Danforth. Soon thereafter he was promoted to a full-time assistant coach and was a member of the coaching staff that led the Orange to its first Final Four appearance in the 1975 NCAA Tournament. In 37 years as head coach at Syracuse, Boeheim has guided the Orange to postseason berths, either in the NCAA or NIT tournaments, in every year in which the Orange was eligible. Boeheim's coaching style at Syracuse is considered unusual in that many highly-successful coaches prefer the man-to-man defense whereas Boeheim demonstrates an overwhelming preference for the 2–3 zone defense. 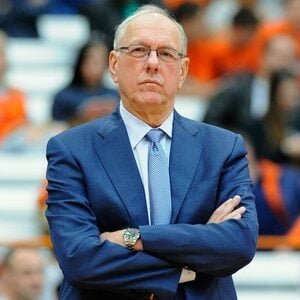