What is Jerry West's Net Worth?

Jerry West is a retired American basketball player who has a net worth of $50 million dollars. Jerry played his entire career in the NBA with the Los Angeles Lakers. In the guard position, he was voted 12 times to the All-NBA First and Second Teams, and played nine NBA Finals throughout his career. After he stopped playing, West became head coach of the Lakers for three years, and later became general manager. West was voted as one of the 50 Greatest Players in NBA history in 1996 and he was the co-captain of the 1960 U.S. Olympic gold medal team in Rome.

Jerry West was born in 1938 in Chelyan, West Virginia, the fifth of sixth children of parents Cecil and Howard. Although initially outgoing as a child, West became timid and introverted following the death of his older brother David in the Korean War. From 1952 to 1956, he went to East Bank High School, where he played basketball under coach Duke Shaver. West soon became the captain of the freshman team, and then the starting small forward. From 1953 to 1956, he was named All-State; in the latter year, he was named All-American. It was in 1956 that West led his school to a state championship title.

Drawing the interest of over 60 universities, West ultimately decided to stay in his home state and attend West Virginia University. During his freshman year, he was part of a squad that achieved a perfect record of 17 wins with no losses. For his junior year, he tied the NCAA five-game tournament record of 160 points, and was named the Most Outstanding Player of the Final Four that year. West recorded several career highs his senior year, including 29.3 points per game and 134 season assists. Overall, he finished his collegiate playing career with 2,309 points and 1,240 rebounds.

Start with the Lakers

In 1960, West was drafted with the second overall pick by the Minneapolis Lakers, just before the team relocated to Los Angeles. Almost an immediate success, West helped the Lakers improve their season to reach the 1961 NBA Playoffs. The next season, he established himself as the primary scorer for the Lakers, averaging 30.8 points and 7.9 rebounds per game, and winning All-NBA First Team honors. Once again, the Lakers made it to the playoffs, and then to the finals, ultimately losing to the Boston Celtics in the beginning of one of the NBA's greatest rivalries.

For the 1962-63 season, West was again named NBA All-Star and All-NBA First Team. The Lakers competed again in the finals against the Celtics, with the same results as the year before. The team struggled the following season, winning only 42 games and falling to the Hawks in the first round of the playoffs.

The NBA's famous logo is a silhouette of Jerry West. In the photo of Jerry below, the logo on the chairs in the background is the famous logo that is based on his silhouette: 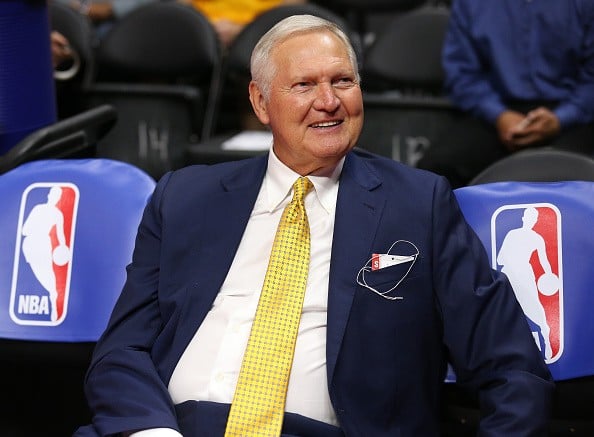 In the 1965 playoffs, West averaged an NBA record of 46.3 points per game. Still, the Lakers were defeated once again by the Celtics in the finals. The next season, West averaged a career-best 31.3 points, and notched an NBA record of 840 free throws; as a result, he earned further All-Star Team and All-NBA First Team nominations. In the finals, the Lakers lost again to the Celtics. After a disappointing 1966-67 season and another finals loss to the Celtics in 1968, the Lakers brought in reigning NBA MVP Wilt Chamberlain of the Philadelphia 76ers. The team fought hard to progress to the sixth finals series against the Celtics in eight years. Despite West's triple-double of 42 points, 13 rebounds, and 12 assists, the Lakers lost 108-106.

West had one of his best seasons in 1969-70, leading the NBA in scoring average and earning his first of four All-Defensive First Team votes. In the first NBA Finals between the Lakers and the New York Knicks, West made a buzzer-beating 60-foot shot that became one of the most famous moments in NBA history. However, the Lakers were defeated by the Knicks in an upset. Greater success came in the 1971-72 season, when West and the Lakers embarked on a record 33-game win streak, en route to 69 wins in the regular season. West was consequently named All-Star, All-NBA, and All-Defense First Teamer, and was voted as the 1972 All-Star Game MVP. The next season, West and the Lakers finally emerged victorious at the finals, beating the Knicks; it was West's first-ever NBA title. West had his final season as a player in 1973-74, winning 47 games and losing in five to the Bucks. After this, he retired due to contract disagreements. At the time of his departure, West had scored more points than any other player in Lakers history.

West became head coach of the Lakers for the 1976-77 season. During his three years as coach, he led the Lakers to a 145-101 record, reaching the playoffs every season and the Western Conference Finals in 1977. Following his coaching tenure, West was a scout for three years, and then became general manager of the Lakers. In the latter position, he helped the Lakers notch five championship rings in 1980, 1982, 1985, 1987, and 1988.

In 2002, West became general manager of the Memphis Grizzlies, and subsequently helped the team win its first-ever playoff berth. In recognition of his management of both the Lakers and the Grizzlies, West twice won the NBA Executive of the Year Award. Later, after retiring as general manager, West joined the Golden State Warriors as an executive board member. In 2017, he became an executive board member of the Los Angeles Clippers.

West married Martha Jane Kane, his college sweetheart, in 1960. They had three sons, David, Mark, and Michael, and divorced in 1976. Two years later, West married his current wife, Karen, with whom he has two sons: Ryan and Jonnie. 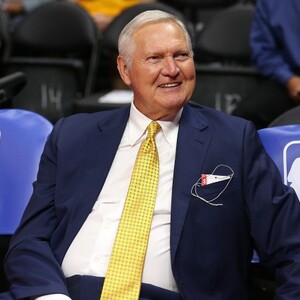