Jerome Kersey net worth and salary: Jerome Kersey was an American professional basketball player who had a net worth of $5 million. During his time in the NBA, he played for a number of teams, but is probably best known for playing with the Portland Trail Blazers. He was born in 1962 in Clarksville, Virginia. He attended Longwood College, which at the time was a NCAA Division II school, and played there until starting for Portland after the 1984 NBA Draft. Coming from a school that was not known for its basketball teams, Kersey was selected in the second round, 46th pick overall by Portland. He was a regular contributor from the bench, eventually becoming a starter, and by his third year, he began to shine – he even came in second behind Michael Jordan in the NBA Slam-Dunk Competition. The following season, 1987–88, was his best statistically. He became a starter and was part of the nucleus of a strong Portland team, along with Clyde Drexler, Terry Porter, Buck Williams, and Kevin Duckworth. With that starting team, Portland made it to the NBA Finals two out of the next three years (in 1990 and 1992). In 1995, Kersey left Portland and began playing for other teams including the Toronto Raptors, the Golden State Warriors, the Lakers, the SuperSonics, the Spurs, and the Milwaukee Bucks. He retired in 2001, and went on to serve as a coach in various capacities for several teams. Kersey married his long-time girlfriend, Teri (Folsom) Donnerberg on September 21, 2013. Together, they raised four children from previous relationships. Jerome has one daughter, Kiara, and Teri  has three children from a previous marriage: two daughters, McKenzie and Maddie, and one son, Brendan. Jerome and Teri Kersey resided together in Lake Oswego, Oregon. On February 18, 2015, Kersey died suddenly at the age of 52. The local fire department responded to a call from his home, and he was taken to a hospital in Tualatin, Oregon where he passed away shortly after his arrival. 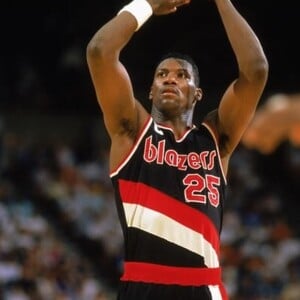