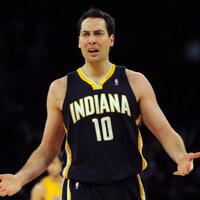 Jeff Foster Net Worth: Jeff Foster is a former American professional basketball player who has a net worth of $22 million. Jeff Foster was born in San Antonio, Texas in 1977. He played college basketball close to home for the Texas State University Bobcats. Foster averaged more than 12 points and ten rebounds per game while in college during his junior season and earned second-team All-Southland Conference honors in 1998. The Golden State Warriors drafted Foster with the 21st overall pick during the first round of the 1999 NBA Draft. The six-foot-eleven, 250-pound center/power forward never played with the team that drafted him. Instead, he was traded immediately along with his draft rights to the Indiana Pacers. Foster went on to play every game of his professional career with the Pacers, staying with the franchise for more than a decade between 1999 and 2012. Foster finished his pro playing career with 3,747 points, 5,248 rebounds, and 703 assists. During his dozen or so years in the league, Foster went to the playoffs seven different times with the Pacers from 2001 until 2006 and again in 2011. He played in more than 50 postseason games, averaging just shy of four points per playoff game to go along with 5.5 rebounds and a 55.6 field goal shooting percentage.