Jaylen Brown net worth and salary: Jaylen Brown is an American professional basketball player who has a net worth of $10 million. Jaylen Brown was born in Marietta, Georgia in October 1996. He is a 6'7″ small forward and shooting guard who played at Wheeler High School where he was Mr. Georgia Basketball as well as a first-team Parade All-American and McDonald's All-American in 2015. Brown played his college basketball at California where he was the Pac-12 Freshman of the Year and a first-team All-Pac-12 selection in 2016. He was drafted #3 overall by the Boston Celtics in the 2016 NBA Draft. Jaylen Brown was selected to the NBA All-Rookie Second Team in 2017. He also won a gold medal representing the United States at the 2014 FIBA Americas U18 Championship. Jaylen Brown signed a contract with the Celtics during the 2019-20 season for $115 million through the 2023-24 season. He is the cousin of NFL player A.J. Bouye. 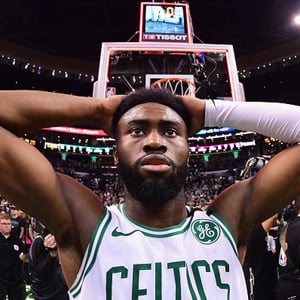