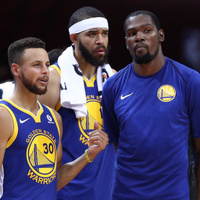 JaVale McGee net worth and salary: JaVale McGee is an American professional basketball player who has a net worth of $14 million. JaVale McGee currently plays for the Denver Nuggets but also played for the Washington Wizards from 2008-2012. McGee was selected 18th overall by the Wizards in the 2008 NBA Draft, and upon joining the Wizards, he signed a two year, $2.4 million deal with the team. He was the first Wizard to ever be chosen to participate in the NBA Slam Dunk Contest and finished second place losing to Blake Griffin. During the Slam Dunk Contest, McGee was the first player to use three balls at one time in a dunk contest, which was later cited by the Guinness Worlds Records as the most basketballs dunked in single jump. In 2010, McGee was fined $10,000 for participating in Gilbert Arenas' antics before a game. At the time, Arenas was being investigated for a prior incident involving guns in the Wizards' locker room, but McGee made light of the accusations by pointing at his teammates as if he were shooting them; his teammates were photographed smiling and laughing. During his time with the Wizards, he became known for his eccentric playing style, which resulted in some uncommon plays. McGee averaged over eight rebounds and ten points over the 2011 and 2012 seasons for the Wizards, but in March was traded to the Denver Nuggets, along with Ronny Turaif, in a deal that sent Nenê to the Wizards. McGee was born on January 19, 1988 in Flint, Michigan to George Montgomery (a 1985 second-round draft selection by the Portland Trail Blazers) and Pamela McGee (a USC standout and WNBA star for the Los Angeles Sparks and Sacramento Monarchs). McGee is the first son of a WNBA player to ever play for the NBA. In 2013, it was announced that McGee would be staring in his own reality television show called Mama's Got Game, with his mother. For his mother's 50th birthday, JaVale surprised her a black Porsche Panmera with a big, red bow on top. On the season premiere of Mama's Got Game, JaVale and his friend are being filmed while visiting the car dealership to check out cars for his mother.