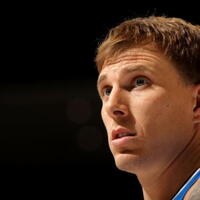 Jason Williams Net Worth: Jason Williams is a former American professional basketball player who has a net worth of $20 million. Born in 1975 in Belle, West Virginia, Jason Williams played college basketball in his home state at Marshall University from 1995 until 1996 before transferring to the University of Florida from 1997 until 1998. The Sacramento Kings drafted Williams with the seventh overall pick of the first round during the 1998 NBA Draft. He played with the Kings until 2001 before he joined the Memphis Grizzlies from 2001 until 2005. Williams later played for the Miami Heat (2005-2008), the Orlando Magic (2009-2011), and the Memphis Grizzlies (2011). He was part of the Heat's 2006 NBA Championship-winning team, seven years after earning NBA All-Rookie First Team honors. Williams finished his pro playing career with 8,266 points, 4,611 assists, and 933 steals. Known as White Chocolate, J-Will, and J-Dub, Williams made headlines for allegedly yelling racist slurs to a season ticket holder with the Golden State Warriors in 2001. Williams was fined by the league and lost an ad campaign with Nike as a result of the allegations. A few years later, he reportedly got involved in an altercation with a columnist following his team's loss in the 2005 playoffs. Williams is involved with several charities, including the St. Jude Children's Hospital.