Jason Terry Net Worth and salary: Jason Terry is an American professional basketball player who has a net worth of $40 million dollars. Born in Seattle, Washington, in 1977, Jason Terry was one of ten kids and grew up playing basketball any chance he could get. He attended the University of Arizona and brought an NCAA Championship to Tucson in 1997.

He was the tenth overall pick in the 1999 NBA Draft by the Atlanta Hawks and quickly proved himself to be Atlanta's best player during his rookie season. In 2004, he was traded to the Dallas Mavericks, and was caught punching opposing player Michael Finley during the 2005-06 playoffs. In 2009, he won NBA Sixth Man of the Year. Terry was part of the NBA Championship-winning Dallas Mavs team in 2011 against LeBron James and the Miami Heat. He signed a deal with the Boston Celtics in 2012, before he was traded to the Brooklyn Nets the next season. One year later, Terry was traded again to the Sacramento Kings, where he is rehabbing a leg injury. He and his wife, Johnyika, have four children together. He made headlines for tattooing the NBA Championship trophy on his arm one season before the Mavericks knocked off the Heat to win the title. 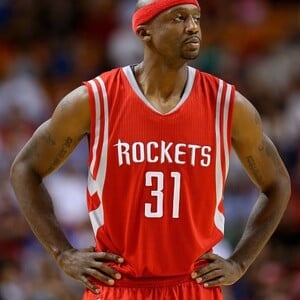