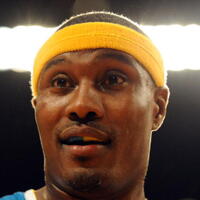 James Posey Net Worth: James Posey is an American assistant basketball coach and former professional basketball player who has a net worth of $22 million. Born in 1977 in Cleveland, Ohio, James Posey played college basketball at Xavier University from 1996 until 1999. The Denver Nuggets chose Posey with the 18th overall pick during the first round of the 1999 NBA Draft. The six-foot-eight, 217-pound small forward played with the Nuggets until 2002 before joining the Houston Rockets from 2002 until 2003, the Memphis Grizzlies from 2003 until 2005, the Miami Heat from 2005 until 2007, the Boston Celtics from 2007 until 2008, the New Orleans Hornets from 2008 until 2010, and the Indiana Pacers from 2010 until 2011. Largely a career journeyman, Posey wore jerseys 41, 52, and 42 during his pro playing career. He earned All-Rookie Second Team honors in 2000 and was part of two NBA championship-winning teams in 2006 and 2008 with Miami and Boston. Posey played internationally for the U.S. men's national team and won a gold medal at the 1998 Goodwill Games in New York. Posey is well remembered for several of his controversial incidents that happened with the Chicago Bulls, including several injuries caused to Chicago players by Posey's hard fouls. Since his retirement, Posey has worked as an assistant coach with the Canton Charge and the Cleveland Cavaliers.