What is James Harden's Net Worth, Career Earnings and Salary?

James Harden is an American professional basketball player who has a net worth of $165 million. Harden made a name for himself after moving from the Oklahoma City Thunder to the Houston Rockets. He was traded to the Brooklyn Nets in January 2021. James has led the league in scoring three times is an MVP winner, and he is an eight-time NBA All-Star.

Today, James is considered one of the best players in the NBA, and he is also considered the best shooting guard in the league. Before playing in the NBA, Harden played college basketball for the Arizona Sun Devils. James also won an Olympic gold medal in 2012 at the Summer Olympics with the United States national basketball team.

James is one of the highest paid players in the NBA. His annual base salary alone tops $44 million. He earns millions more every year from endorsements.

James Edward Harden Jr. was born on August 26th of 1989 in Los Angeles, California. Harden was raised in a Christian household, and he remains a Christian to this day. Prior to his birth, his mother had a number of miscarriages. Harden has an older sister. Soon enough, James' basketball talents became obvious. He shone as a high school athlete, and he was named as a McDonald's All-American. He also played for an AAU team that won the 2006 Las Vegas Adidas Super 64 championship.

After graduating from high school, Harden attended Arizona State and played for their basketball team. During this period, James started receiving considerable exposure and even appeared on the cover of "Sports Illustrated" magazine. After finishing his sophomore season, Harden declared himself eligible for the 2009 NBA draft.

James began his career with the Oklahoma City Thunder. During his first season, he recorded a very high three-pointer success rate despite being a young player. He eventually won the NBA Sixth Man of the Year Award after the 2011-2012 season. That season, he helped the Thunder reach the NBA Finals, although they lost to the Miami Heat. Harden was then offered a lucrative contract extension, but he declined and signed with the Houston Rockets instead.

Houston made it clear that they saw Harden as a "foundational player," and he did not play a reserve role as he had done with the Thunder. Almost immediately, he was offered a contract extension. Their faith in him proved well-founded, as Harden recorded some of the most impressive statistics in history during this first season with the team. During this period, he also won selection to the All-Star team for the first time.

Over the next few seasons, James was in close contention for the MVP Award – an award that he would eventually win in 2018. During this period, Harden was offered a number of additional contract extensions, and he was clearly an integral part of the Houston Rockets. He also led the league in scoring a number of times. 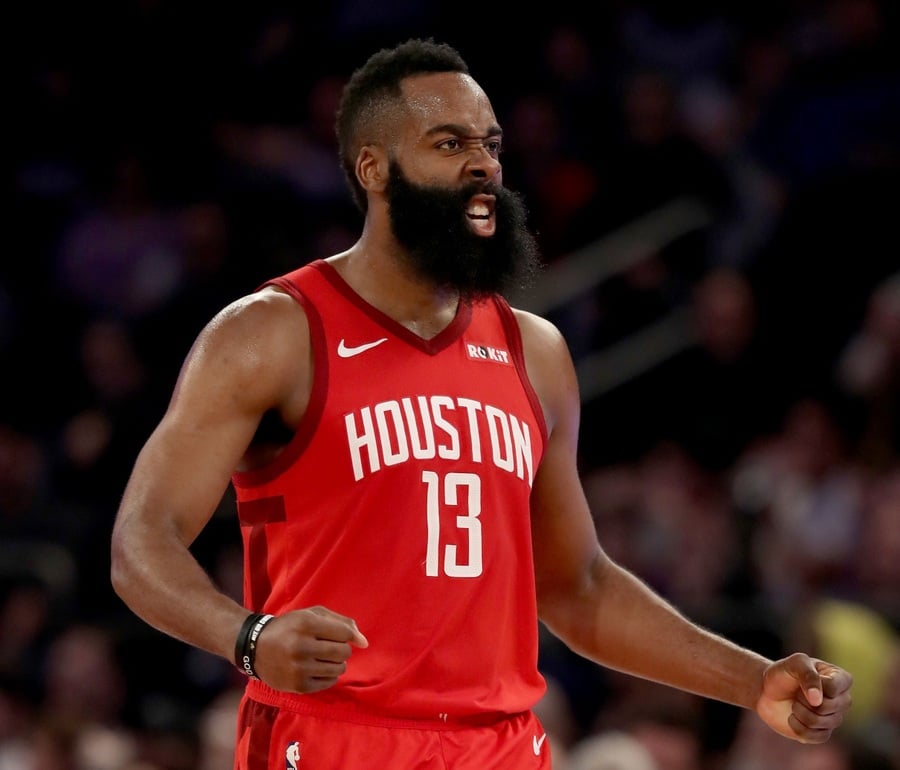 Initially, Harden was earning about $14.7 million per year as an NBA player. Later, this sum increased to about $40 million as he became a more central player for the Rockets. In 2017, it was revealed that Harden had signed a new contract, making him the richest player in NBA history. The four-year extension with the Rockets was worth $228 million, paying James an average of $47 million per year.

In 2020, Harden's contract was almost up. Seeking to keep him with the team, Houston offered him a two-year, $103 million extension. Harden declined. The extension would have made Harden the first player to ever receive at least $50 million in a season. With three years and $132.9 million remaining on his deal, Harden will still make plenty of money. Harden probably turned down the extension to encourage a trade to another team – namely the Brooklyn Nets. That trade happened in January 2021.

In 2015 James Harden signed a $200-million deal to leave Nike for rival sportswear company Adidas. The 13-year deal pays James an average of $15 million per year on top of his basketball salary, which is now higher than $40 million per year. Harden is also known for appearing in State Farm Insurance commercials.

In 2015, Harden purchased a home in Houston for $2 million. The property originally belonged to Cuttino Mobley, another player in the NBA. Constructed in 2002 with Mediterranean design influences, the residence sits in a gated community within the Royal Oaks Country Club, near a golf course. With 7,100 square feet of living space and four bedrooms, the property is quite luxurious. Notable features include a sweeping staircase, a stone fireplace, and a theater room. The home also sits on a half-acre plot of land, which includes an infinity pool and a spa.

In 2019, Harden splurged on a much more extensive estate. He reportedly paid $10 million for the residence, which sits on 3.5 acres of land in Rivercrest – an affluent neighborhood in Houston's suburbs. Spanning a whopping 26,000 square feet, the home itself features a wine room, a full bar, and a fitness room. The residence features steel, modern-inspired construction.