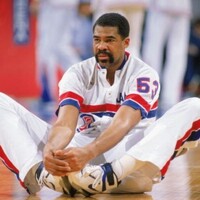 James Edwards net worth: James Edwards is an American former professional baseketball player who has a net worth of $2 million. James Edwards was born in Seattle, Washington in Novemebr 1955. He was a 7'0″ center and power forward who was known for his turn-aroudn fade away jump shot. Edwards played his college basketball at Washington where he was a two time First-team All-Pac-8 selection and was drafted #46 by the Los Angeles Lakers in the 1977 NBA Draft. He played for the Lakers in 1977 and then for the Indiana Pacers from 1977 to 1981. Edwards played for the Cleveland Cavaliers from 1981 to 1983, the Phoenix Suns from 1983 to 1988, and the Detroit Pistons from 1988 to 1991. He played for the Los Angeles Clippers from 1991 to 1992 and for the Lakers again from 1992 to 1994. Edwards finished his NBA career with the Portland Trail Blazers from 1994 to 1995 and the Chicago Bulls from 1995 to 1996. During his career he was a three time NBA Champion.