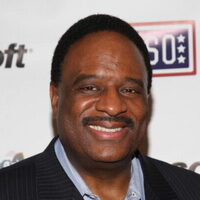 James Brown net worth and salary: James Brown is an American sportscaster who has a net worth of $16 million. James Brown was born in Washington, D.C. in February 1951. He graduated from Harvard University where he earned All-Ivy League honors playing basketball. Brown tried out for the Atlanta Hawks of the NBA but failed to make the roster. He worked for Xerox and Eastman Kodak before getting into sports broadcasting in 1984 when he started doing television broadcasts for the NBA's Washington Bullets. From there Brown worked as an anchor for WDVM-TV in Washington and did some work with CBS Sports. He joined CBS in 1987 and did play-by-play announcing for their NFL and college basketball coverage. Brown also appeared on coverage for the NBA Finals and the 1992 and 1994 Olympics. In 1994 he became host of the NFL on Fox pregame show and also served as lead studio host for FOX NHL Sunday from 1994 to 1998. After the 2005 NFL season he left Fox and rejoined CBS Sports. He currently serves as host for The NFL Today on CBS and a substitute anchor on the CBS Evening News. Brown became a minority owner of MLB's Washington Nationals in 2006.