Jameer Nelson Net Worth: Jameer Nelson is an American professional basketball player who has a net worth of $20 million. Born in Chester, Pennsylvania, in 1982, Jameer Nelson played high school basketball in his hometown before attending Saint Joseph's to play college ball from 2000 until 2004. Nelson earned consensus first-team All American honors in 2004, the same season he earned first-team All-Atlantic 10 recognition.

Nelson also earned Atlantic 10 Conference Player of the Year honors and National College Player of the Year honors in 2004. The Denver Nuggets drafted Nelson with the 20th overall pick during the first round of the 2004 NBA Draft. Nelson played the first decade of his career from 2004 until 2014 as a member of the Nuggets before he landed with the Dallas Mavericks in 2014. As of the fall of 2014, Nelson remains a member of the Mavericks. In 2005, he earned NBA All-Rookie second team honors and, five years later, was named an NBA All-Star in 2009 for the first time in his career. He has played internationally for the United States' men's basketball team, earning a gold medal at the FIBA U21 World Championship in 2001 in Saitama. Nelson's family made headlines in 2007 when his father disappeared; his body was later recovered in the Delaware River a few days later. The death was determined to be an accident. Nelson has one son and is married to his wife, Imani Tillery. 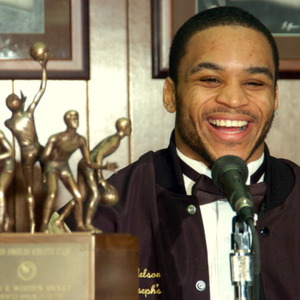