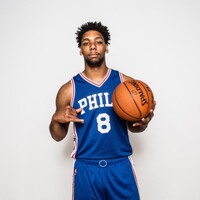 Jahlil Okafor net worth and salary: Jahlil Okafor is an American professional basketball player who has a net worth of $7 million. Jahlil Okafor was born in Fort Smith, Arkansas in December 1995. He is a 6'1″ center who played at Whitney Young High School where he was named Illinois Mr. Basketball, National Player of the Year, and was the McDonald's All-American Game co-MVP and Jordan Brand Classic co-MVP in 2015. Okafor played for one year at Duke where he won the NCAA championship, was named a Consensus first-team All-American, USBWA National Freshman of the Year, and ACC Player of the Year in 2015. Okafor was drafted #3 by the Philadelphia 76ers in the 2015 NBA Draft. Jahlil is a distant cousin of NBA player Emeka Okafor. He also represents the United States in international competition and has won Gold Medals at the 2011 FIBA Americas U16 Championship, 2012 FIBA World U17 Championship, and 2013 FIBA World U19 Championship.