J.R. Smith net worth and salary: J.R. Smith is an American professional basketball player who has a net worth of $35 million dollars. He is probably best-known as a member of the Cleveland Cavaliers, with whom he won an NBA Championship in 2016.

J. R. Smith was born Earl Joseph Smith, III in Freehold Borough, New Jersey on September 9, 195. He began playing basketball in high school. He went on to graduate from St. Benedict's Preparatory School, and was originally planning to attend the University of North Carolina at Chapel Hill. However, he subsequently chose to enter the 2004 NBA Draft and the New Orleans Hornets drafted him directly out of high school.

He spent two years with the Hornets. He played moderately well, earning Western Conference Rookie of the Month honors three times during his first year with the team. He was traded to the Denver Nuggets in 2006. He played well for the team setting a franchise record for the number of successful three-pointers (11) during a single game. He spent one year with the Zhejiang Golden Bulls in Asia in 2011. He reportedly signed a $3 million one-year deal to play with the Golden Bulls, a single-season record for a Chinese league contract at that time. In June 2011 he sued the Golden Bulls for failing to pay $1 million in salary. The team claims they withheld his salary for missing practices and faking an ankle injury.

He returned to the NBA play for the New York Knicks ahead of the 2012 season. In 2013 he was named NBA Sixth Man of the Year.

Smith joined the Cleveland Cavaliers in 2014. Ahead of the 2016 season J.R. signed a four-year $57 million deal with the Cavs, which averages around $14 million per year in salary. The team went on to win the NBA Championship that year. 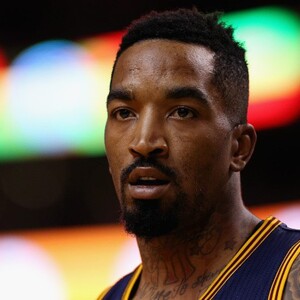