Hedo Turkoglu Net Worth: Hidayet "Hedo" Turkoglu is a Turkish professional basketball player who has a net worth of $35 million. Born in 1979 in Istanbul, Turkey, Hedo Turkoglu is a six-foot-ten forward. He began his professional career in 1996 with Efes Pilsen in Turkey before the Sacramento Kings drafted him with the 16th overall pick during the first round of the 2000 NBA Draft.

Turkoglu played with the Kings until 2003. He briefly played with the San Antonio Spurs from 2003 until 2004, the Orlando Magic from 2004 until 2009, the Toronto Raptors from 2009 until 2010, the Phoenix Suns in 2010, and the Orlando Magic from 2010 until 2014. In 2014, Turkoglu became part of the Los Angeles Clippers. He was named to the 2001 NBA All-Rookie Second Team and earned the league's Most Improved Player honor in 2008. He has appeared in nearly 100 career playoff games, including five with the Clippers in 2014. His best run came with a 24-game appearance in the 2009 playoffs with the Orlando Magic. Turkoglu has competed internationally for Turkey, capturing a silver medal at the FIBA European Championship in 2001 and a silver medal at the FIBA World Championship in 2010. Turkoglu has two children, Ela and Lina, with his wife, Banu. 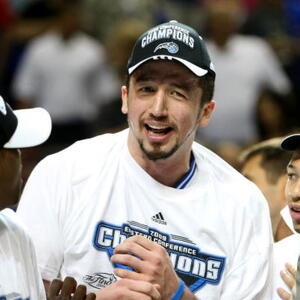